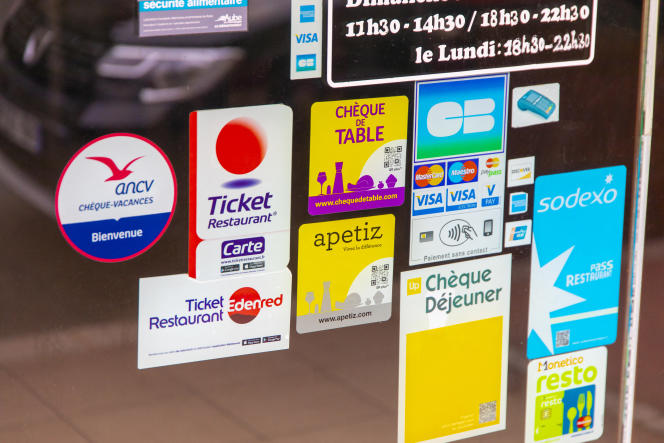 It’s a return to normal for the approximately four million employees who benefit from it: the ceiling for daily use of meal vouchers comes back, Friday, July 1, to 19 euros.

The doubling of this ceiling to 38 euros and the authorization to use this means of payment also on weekends and public holidays had been decided at the end of the first confinement in 2020. As the health crisis continued, the device had been renewed several times, the last time in February until June 30.

“These measures have made it possible to revive consumption in restaurants” and “to accelerate the use of tickets saved by employees due to health restrictions”, recalls the Ministry of Economy and Finance. But “today, these two causes have died out” and “the stock of tickets has been exhausted”, the old tickets from 2021 having been replaced by tickets valid in 2022, notes the ministry.

The amount payable in meal vouchers will therefore return to its pre-health crisis ceiling, at 19 euros. It was established in 2014 by article R3262-10 of the labor code, according to which: “The use of meal vouchers is limited to a maximum amount of nineteen euros per day. When [they] are issued in dematerialized form, the employee is debited with the exact amount to be paid, within the limit of the maximum daily amount mentioned. »

Jean-Michel Rousseau, who chairs the National Commission for Restaurant Vouchers (CNTR, made up of representatives of the professional organizations and trade unions most representative of employers and employees, restaurateur unions and companies issuing restaurant vouchers), recalls that this amount was set during the dematerialization of restaurant vouchers, in 2014, on the occasion of the “shock of simplification”.

“Nineteen euros, that corresponded to the face value of two meal vouchers [in paper format] for a meal”, explains Mr. Rousseau. Since that date, restaurant vouchers in paper format coexist with rechargeable cards, which work in the same way as a bank card.

He adds that the CNRT tried to move the lines by sending a letter at the end of May to the Ministries of the Economy and Labor asking them to permanently raise the daily ceiling to 29 euros in restaurants, while recommending to maintain it at 19 euros with other professionals approved to collect it (food trades, food distribution, etc.). But he did not get satisfaction.

Use regulated by law

The restaurant voucher thus remains faithful to its history: it is used to finance the lunch break. In 1913, a first law established company catering, recalls the CNRT, but the principle of the luncheon voucher (or “good meal”) was born in the United Kingdom in 1950. The concept crossed the Channel in 1957 before the government of Georges Pompidou, convinced by this system of taking charge of salaried catering, provided it with a legislative framework in 1967.

Since then, the conditions of use of meal vouchers have evolved and become more flexible – extending them to public authorities, to purchases of fruit and vegetables or fresh, frozen or canned ready meals, prepared salads and salads. composed – but they remain strictly framed.

According to the texts, they are intended to provide a meal to employees during their working day. They are nominative – it is forbidden to give them to third parties – and must only be used during working days, except for employees required to work on Sundays or public holidays. The law only authorizes the use of one restaurant voucher, even if, in practice, it is possible to pay with two.

Finally, they must only be used in the department of the beneficiary employee’s place of work and neighboring departments, unless otherwise stated by the employer, etc. A set of more or less respected rules.