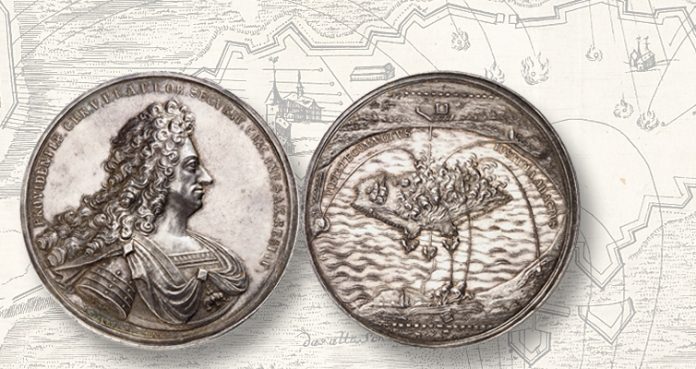 Though his effort was ultimately ineffective, Denmark’s King Christian V obtained a medal because of his 1693 devastation of a town in northern Germany in his own attempts to seize control of this dukedom from the promises of the house of Hanover.

His son, the Crown Prince Frederick IV, commissioned the job, which relies on a modern engraving.

A good instance of the silver decoration is one of the numerous highlights of MDC Monaco’s June 12 auction.

The medal commemorates the bombings of Ratzeburg (also spelled Ratzebourg) in northern Germany, and has been established in 1694 by artist Barthold Meyer at Dömitz, a city in Germany.

The crown prince gave the trophy to his dad for Christian V’s birthday.

Ratzeburg has been the funding of Saxe-Lauenburg, a portion of the old Duchy of Saxony.

The king graces the obverse of this medal, although the bombing scene depending on the modern print looks on the opposite.

The decoration is infrequent, magnificent, and of great historic interest, as stated by the auction house.