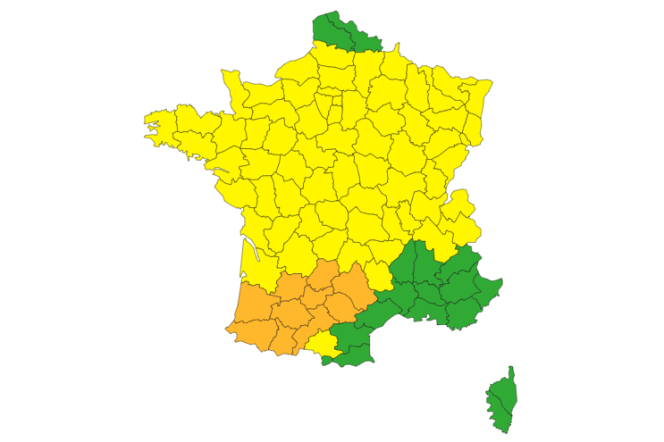 Météo-France placed ten departments located in the south-west on Friday June 3 on orange alert, alerting of “a high risk” of hail and gusts of wind. The departments concerned are: Landes, Lot-et-Garonne, Pyrénées-Atlantiques, Aveyron, Haute-Garonne, Gers, Lot, Hautes-Pyrénées, Tarn and Tarn-et-Garonne.

“These storms could be locally violent, characterized by a pronounced risk of strong gusts and large hailstorms”, warns Météo-France in its press release. The gusts of wind can reach 100 to 120 km / h in certain places and hailstorms could be “locally heavy”. Precipitation accumulations are likely to reach 20 to 40 millimeters per hour, “or even more”. During the afternoon, these strong storms will progress towards the departments of the North-East and will lose activity when arriving on the Massif Central, adds the press release.

Chance of thunderstorms over the weekend

Météo-France advises, during these stormy episodes, to move away from trees and waterways, to take shelter in a solid building, to avoid moving around, to protect goods exposed to the wind and which may be flooded and avoid using telephones and electrical appliances.

While Bison smart anticipates a busy Pentecost weekend on the roads, including a Red Friday in the direction of departures, Météo-France calls for being “particularly careful” and regularly monitoring its vigilance bulletins. The risk of sometimes violent thunderstorms will persist until Sunday.