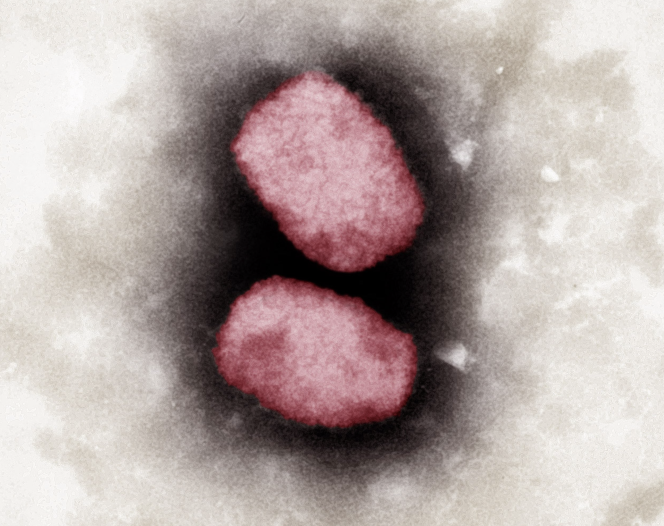 French health authorities had identified, as of June 9, 91 confirmed cases of monkeypox on French territory. The 85 cases investigated for health involved men between the ages of 20 and 63.

Globally, the World Health Organization (WHO) recorded 780 cases in 27 countries as of June 4. An unprecedented progression in the history of this tropical disease, usually confined to certain areas of the African continent.

Monkey pox (monkeypox) is an infectious and contagious disease caused by a virus of the orthopoxvirus genus, the same family as vaccinia or human smallpox (declared eradicated in 1980 by the WHO after a large vaccination campaign). This virus is widespread among some twenty animal species, including certain primates and rodents, and has been transmitted to humans occasionally since 1970.

The disease is called “monkey pox” because it was discovered in 1958 in Denmark in a crab-eating macaque from Singapore and its symptomatology is very similar to human smallpox. It is nevertheless much less virulent, contagious and deadly than this one.

Monkeypox is endemic to two tropical regions of sub-Saharan Africa, i.e. it circulates more or less permanently in these two areas:

Unlike RNA viruses like SARS-CoV-2, the monkeypox virus is double-stranded DNA, meaning it replicates when it enters the nucleus of infected cells. It is quite large, oval in shape and protected by two membranes. Its genome is also quite long, which complicates genomic analyses.

DNA viruses mutate less than RNA viruses. Nevertheless, two variants (or “clades”) exist for each of the areas where it naturally circulates: the West African clade and the Congo Basin clade.

A comparison of the genomes of these two clades carried out in 2005 by a North American team concluded that there was a difference of approximately 0.55%, which is sufficient to confer on them a different virulence and mortality.

Like all viruses of the orthopoxvirus genus, monkeypox virus causes pustular disease. After an incubation period of five to ten days during which the infected person is not contagious, the disease first manifests itself by high fever, great fatigue, headaches and body aches. The vast majority also have pronounced swelling of the lymph nodes in certain places (under the jaw, in the neck and in the groin).

After two days, it enters its “eruptive” and contagious phase with the appearance of lesions on the skin, in the form of pimples which have four successive forms:

The number of pimples varies depending on the individual, but they all evolve at the same time over a period of two to four weeks towards drying out, which leads to the formation of a crust, until they completely disappear. However, they can leave visible traces on the skin for some time.

In Africa, these pimples are concentrated on the face and on the extremities (palms of the hands, soles of the feet, the genitals) and to a lesser extent on the trunk. But in Europe, skin lesions are found more on the genital and perianal areas, without spreading to other parts of the body, according to reports made to the WHO. What causes a problem: the symptoms are less obvious and the diagnosis is more difficult. A clinical picture confirmed by Benjamin Davido, infectious disease specialist at the Raymond-Poincaré hospital in Garches (Hauts-de-Seine), whose team was recently able to examine two French cases, which does not exclude that the virus circulating in Europe is carrier of mutations.

Some cases may present with more serious symptoms, such as infection of the dermis, lungs (pneumonia), brain (encephalitis), cornea (with loss of sight) or more rarely sepsis (dysfunction of organs secondary to the following a serious infection). In endemic areas, these complications mainly affect fragile subjects – young children, very old people, immunocompromised or affected by a disease that puts a strain on the immune system (certain cancers or blood diseases, for example).

However, as of June 2, no monkeypox-related deaths have been recorded in North America or Europe, according to the WHO. Very few patients have been hospitalized, apart from those admitted to treat a secondary infection or to be placed in isolation. In France, of the 85 cases investigated, two immunocompromised people were hospitalized but are no longer so, and none died. But given the rate of increase in new cases, “it could happen,” says Dr. Davido. I don’t think we’re dealing with a strain that has no virulence.”

In Africa, the death rate varies between 3.6% and 10.6%, according to a review published by a team of American researchers in February 2022. Between 1970 and 2019, monkeypox caused the death of 78 people, including 68 related to the Congo Basin clade. And since the beginning of 2022, health authorities have recorded 66 additional deaths, out of 1,408 cases (as of June 1), including 58 deaths in the Democratic Republic of Congo (DRC) alone.

In Europe, the disease having never circulated before 2018, it is for the moment not possible to know its real mortality. Differences in health systems between continents could explain the differences in virulence. The WHO notes that “with appropriate care, most patients recover”. However, it will take time and genomic analyzes of the virus to find out more.

Transmissions from animals to humans can occur through direct contact with the blood, body fluids, mucous membranes or skin of an infected animal, or by consuming undercooked meat.

Human-to-human transmissions are also possible, but less observed by researchers. It is well established that the pathogen is transmitted by contact with skin lesions or respiratory secretions (the sputters emitted when talking), but probably after prolonged face-to-face interaction.

Viruses of the orthopoxvirus genus survive quite a long time outside the human body, and can be transmitted through surfaces. It is therefore risky to eat or drink from the same dishes, or sleep in the same room as a sick person.

According to Public Health France, the majority of people with monkeypox in France are men who have sex with men, and for many, with “multiple sexual partners”. But so far there is no evidence of sexual transmission. Contamination is more likely to be explained by the close and prolonged contact involved in sexual intercourse. However, work is underway to find out if the virus has been able to adapt.

Orthopoxviruses have surface proteins, and therefore “signatures”, very close to each other. They are quite sensitive to antibodies developed against other viruses of the same family; they are said to generate cross-immunity. The virus can thus be combated with existing vaccines against other viruses of the same genus. On the other hand, they cannot, at present, be detected specifically.

The vaccine against vaccinia, a disease commonly known as “cowpox”, used worldwide in the 1960s and 1970s to eradicate human smallpox, is 85% effective in controlling monkeypox virus infection. In France, this smallpox vaccination was compulsory until 1979, which means that the 34 million people over the age of 43 (i.e. half of the population) are in principle well protected against monkeypox. “Even people who were vaccinated many decades ago maintain very, very high levels of antibodies and the ability to neutralize the virus,” said Luigi Ferrucci, scientific director of the National Institute on Aging in Baltimore ( Maryland), in the New York Times. Work published in 2007 in the New England Journal of Medicine showed that the amount of smallpox antibodies declined very slowly. This protective effect is seen in patient data: unvaccinated people represent between 79% and 96% of cases.

At present, there are no plans to vaccinate all or part of the population with this vaccine, as the number of cases is reduced and contagiousness low. Especially since current stocks are limited and do not allow large-scale vaccination, the last case of human smallpox dating from 1977. The current strategy is rather to vaccinate contacts of infected people, those who have the greatest risk of be contaminated, in accordance with the opinion of the High Authority for Health issued on May 20.