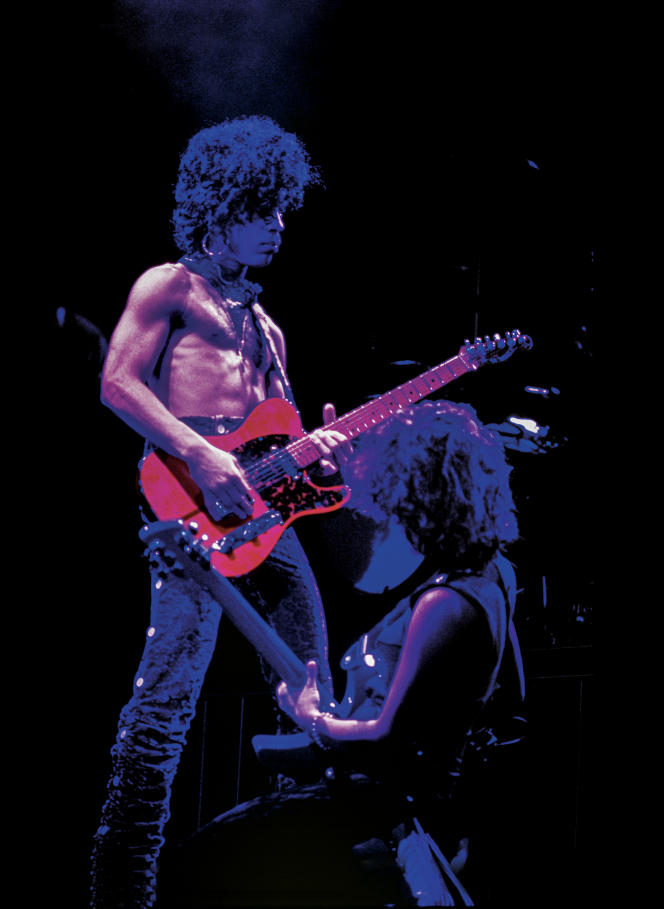 In the darkness of the Carrier Dome, an indoor stadium in Syracuse, New York, a voice is heard. “Hello Syracuse and the world. My name is Prince. An address from Prince to the city and the world this evening of March 30, 1985, before the start of his concert, filmed and presented live by satellite in the United States and in various countries. A delayed broadcast will take place a little later by television channels in Europe, including Antenne 2 (now France 2), on May 25, as part of the program Les Enfants du rock.

Marketed this same year 1985, in July, on video cassette support and in a limited number of copies on Laserdisc support, this document had waited until 2017 to benefit from a publication on DVD. It was part of a reissue of the album Purple Rain (June 1984), Prince’s greatest commercial success, in a box called “deluxe” with the addition of previously unreleased songs and songs released as singles. This concert is now published as such, on Blu-ray with 2 CDs of soundtracks.

This March 30, 1985, Prince and his group The Revolution are almost at the end of a long tour that started on November 4, 1984 at the Joe Louis Arena in Detroit (Michigan), with a short break of about ten days, at the beginning of February. 1985. There are a few dates left in early April and the Purple Rain craze is coming to an end. There was the film (an Oscar for music) on which Prince began working in the spring of 1983, the album (two Grammy Awards), and almost 100 concerts in the United States – two in Canada -, in arenas with 15,000 to 20,000 seats and a few stadiums. Prince has become an international star, and the film will give his growing fan base outside the United States a taste of what the concerts have been like.

Fusion of funk, rock and pop

In a bluish light, silhouette in Chinese shadow, Prince begins, as during the other concerts of the tour, with Let’s Go Crazy, an invitation to party. It is one of nine songs from the album Purple Rain. They are all played, as well as the God theme, which appears in the film, and some old ones, including 1999, Little Red Corvette or International Lover. In the foreground are Prince, guitarist Wendy Melvoin and bassist Brown Mark. On a second stage, raised, adorned with fabrics, flowers, masks, a red heart in neon tubes, drummer Bobby Z. and keyboardists Lisa Coleman and Matt Fink. A third structure allows Prince from time to time to overcome the whole during solo parts on the guitar.

A The Revolution will join, for an epic Baby I’m A Star sequence, the percussionist Sheila E and members of her group – the formation ensured the first part during the tour -, the saxophonist Eric Leeds, the vocal trio Apollonia 6 , dancers Wally Safford, Greg Brooks and Jerome Benton. A sequence with choreography, visible enthusiasm of the troupe, which constitutes one of the peaks of the concert.

There are many others in this fusion of funk, rock and pop, such as the sequence, after Let’s Go Crazy, of Delirious, 1999, Little Red Corvette and Take Me With U, the intimacy of God , or the nineteen-minute finale Purple Rain – during the tour, some interpretations were longer –, with a soloist part from Prince. For the occasion, he swaps his Hohner Madcat guitar – a partial copy by a Japanese company of a Fender Telecaster – for a white model of Cloud Guitar designed for Prince by luthier David Rusan in 1983, the one we see in the movie Purple Rain and in the song’s music video.

Captured on video, the image of this evening could not be restored as films on film can be. But it has been digitally improved, by inflating the luminosity, by pushing the definition a little, compared to the DVD, then simple report of the original document. This can be seen in the close-ups and when the concert lighting had been strong enough. Nothing miraculous however for the darkest sequences, the wide shots.

As far as the sound is concerned, if the 5.1 mix, for those equipped with the appropriate speaker system, does not play on the spatialization of the instruments everywhere, remaining in a pleasant enveloping effect, the restoration was made from master magnetic tapes and constitutes clear progress. The CDs benefit from the same source.

In an interview with the American magazine Variety, on June 7, Wendy Melvoin explains that that evening, there was “a lot of pressure, you should not make the slightest mistake”. The show, honed by months of touring, with its instrumental interludes, Prince’s costume changes (shiny, lace), movements to the millimeter, allowed itself on other occasions “to be more relaxed”, says Lisa Coleman. A little more tension that neither the eyes nor the ears perceive.