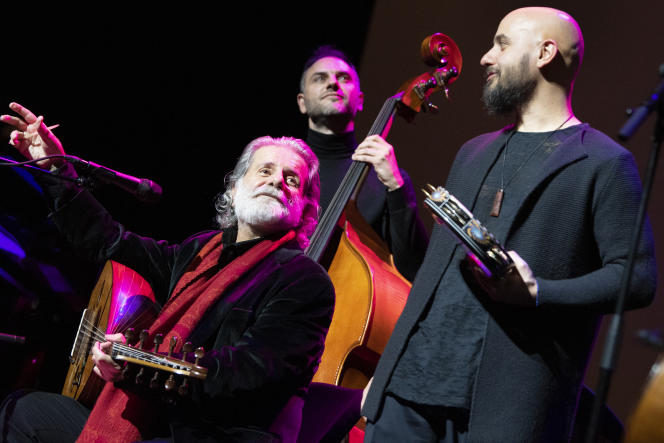 Conceived on an idea of ​​the musician and singer Bachar Mar-Khalifé, the recital Mahmoud, Marcel et moi, played in septet by the pianist with his father Marcel Khalifé, singer, composer and player of the oriental lute (oud) Lebanese, is built in great part around the work of the Palestinian poet Mahmoud Darwich (1941-2008). It took off in 2020 before being stopped by the pandemic after three concerts (in Lyon, Abu Dhabi, then at the Philharmonie de Paris). It has been coming back to life for a few months and will be presented at Jazz à Vienne on Saturday July 2.

According to Bachar Mar-Khalifé, this show is intended as a cross tribute to the poet, luminary of contemporary Arab literature, friend of the family, and to his own father, Marcel Khalifé, who on his album Promesses de la tempest (published in France in 1976 on the label Le Chant du Monde) set to music the verses of Mahmoud Darwich.

What he heard in Darwish’s poetry, explains Bashar, the composer’s youngest son, was first and foremost his father’s songs, with which he grew up. “It was later, during my adolescence in France [born in 1983 in Beirut, he arrived there with his family at the age of 6] that I became really interested in Mahmoud Darwich, and also passionate about poetry in general. It allows for so many different approaches and readings! Very early on, he wanted to give presentations at school to publicize the poet’s work and commitment.

Marcel Khalifé remembers having started to put his poems to music during the war in Lebanon. “I was in my native village, I had just finished my studies at the National Conservatory of Beirut when it broke out. Cut off at home, with his collections, his books, I wanted to put music to his poems, to pass the time. The first was Promises of the Storm.

After six months, he was forced to leave the region and took refuge in Paris where friends advised him to record. Within a day, the deal was done. The Promises of the Storm album contains several of Darwich’s poems, recorded “without asking his permission. We hadn’t met yet.” He will continue thereafter to set to music the poetry of the one who will become a very close friend.

“Every time I read it, it triggered in me the urge to grab it,” says Marcel Khalifé. Not without pitfalls sometimes. In 1999, following a complaint by the leader of the Sunni Muslim community, an investigating judge in Beirut instituted proceedings against him for “offending Islam” because he sang a text written in 1992 by Mahmoud Darwich entitled O Father, I am Joseph which takes up a verse from the Koran. The lawsuits will eventually be overturned. “I want to continue composing for him,” insists Marcel Khalifé. In 2016, for example, he published Andalusia of Love (Nagam Records), a long love poem, which he recorded with Jilbert Yamine (kanoun) and his two sons, Bachar (on percussion) and Rami (piano).

“Marcel, he took me on stage at the age of 15 with him, continues Bachar Mar-Khalifé. And even before that, it was my first musical school. When I landed alongside him on stages in front of 10,000 people, I barely knew how to play my instruments. Putting him on stage and playing with him in 2020, the year of his 70th birthday, was like giving him a gift. Whose pleasure to offer continues today.