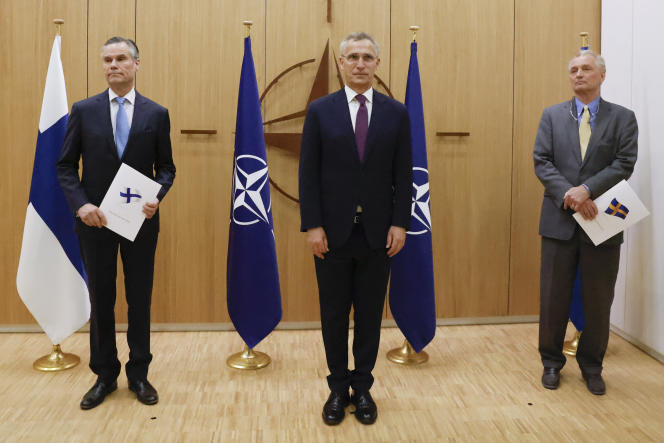 They have taken the leap. Finland and Sweden submitted their applications to join the North Atlantic Treaty Organization (NATO) on Wednesday, May 18. “This is a historic moment at a critical time for our security,” said NATO Secretary General Jens Stoltenberg, who received membership applications submitted by ambassadors from two countries. “We hope to quickly conclude [the proceedings],” he added.

This move by the two Nordic countries, which remained neutral in terms of a military alliance throughout the Cold War, marks a radical change in Europe’s security architecture: it is motivated by the invasion of Ukraine by the Russia.

Turkey can then put a stop to the process by refusing to sign the accession protocols and finally refuse to ratify the accession. The unanimity of the thirty members of the Atlantic Alliance is imperative for membership.

“Anything is possible,” said a European diplomat. “But in NATO we always find solutions,” he added. Turkish President Recep Tayyip Erdogan may want to raise the issue at the NATO summit in Madrid on June 29-30. Ankara “will not give in”, he assured Monday.

Analysts believe that Turkey is certainly looking for counterparties in exchange for its green light, for example the lifting of the refusal of the United States to sell them F-35s, the powerful American fighter plane.

Ankara criticizes Sweden and Finland in particular for not approving its requests for the extradition of people it accuses of being members of “terrorist organizations” such as the PKK (Workers’ Party of Kurdistan), or of having frozen arms exports to Turkey. Turkey blocked a NATO statement earlier this week in favor of the two countries joining, we learned from a diplomatic source.

The Turkish blockade deprives Finland and Sweden of the protection provided by NATO to all its members in the event of aggression. “The security interests of all allies must be taken into account and we are determined to examine all issues and reach conclusions quickly,” Jens Stoltenberg assured the two ambassadors on Wednesday.

Despite these quarrels, the Finnish president said he was “optimistic” about securing Turkey’s support, “through constructive discussions”. “Sweden looks forward to working with Turkey in NATO, and this cooperation can be part of our bilateral relationship,” Swedish Prime Minister Magdalena Andersson said, assuring that Stockholm “is committed to the fight against all forms of terrorism”.

Canada has already committed to accelerating the process: “We are in favor, and we are in favor not only of accession, but of rapid accession,” said Canadian Foreign Minister Mélanie Joly, Monday.

In Washington, American diplomacy also displayed a certain optimism. “We are confident in our ability to preserve the consensus within the Atlantic Alliance” in favor of membership, its spokesman Ned Price told reporters, assuring that this feeling had “not changed” despite the statements of the Turkish President. US Secretary of State Antony Blinken is due to meet his counterpart, Mevlüt Çavusoglu, in New York on Wednesday.

Ms Andersson and Finnish President Sauli Niinistö will travel to Washington on Thursday to meet US President Joe Biden, the White House announced.

“Nokiagate”: in the Netherlands, the Prime Minister in turmoil after deleting text messages on his phone

Ukraine denounces “second-class treatment” regarding its application to join the European...

News Editor - May 19, 2022 0
For weapons, yes. For a quick membership, it's no. Berlin and Paris have made this known to Ukraine. Which irritates Dmytro Kuleba. The head...

“Nokiagate”: in the Netherlands, the Prime Minister in turmoil after deleting...