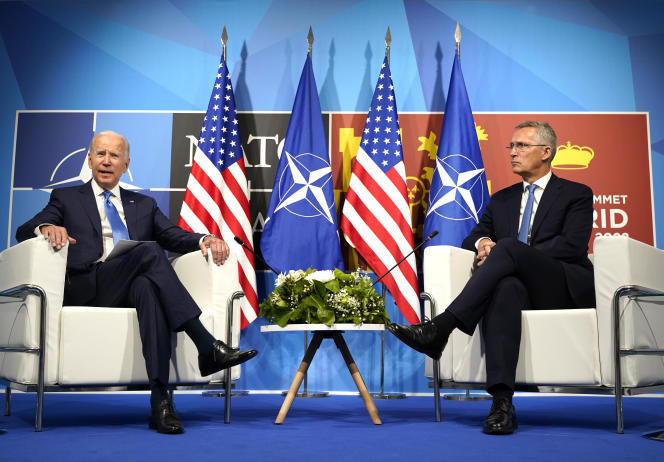 The cold war atmosphere, revived by the Russian attack on Ukraine, has found a new translation. Presented as a “partner” since the late 1990s, Russia has again become a “threat” to the thirty member countries of the North Atlantic Treaty Organization (NATO). Moscow poses “the most significant and direct threat to the security of the allies”, Alliance Secretary General Jens Stoltenberg said at the organization’s summit, which was held in Madrid from June 28-30 and during which the European and North American capitals displayed a united front.

As a sign of this change in tone, NATO announced at the summit a reinforcement of its defense system on the eastern flank of Europe. The forces made available to the Alliance by member countries and capable of being rapidly deployed will be increased “well over” 300,000 troops, Mr. Stoltenberg announced, without however specifying their distribution. This new plan should allow the organization, in the event of aggression by one of the member countries, to deploy 100,000 men in less than ten days, then an additional 200,000 within thirty days, against 40,000 who can be mobilized in less than fifteen days now.

Before the announcement of these new rapid reaction forces, NATO had already decided, in March, to strengthen its permanent presence in the easternmost countries of the Old Continent. Four new “battlegroups” have since been created in Romania, Bulgaria, Hungary and Slovakia, bringing the number of military alliance locations on the eastern flank to eight. One way to fill the gaps in the 1,200 km arc from the Baltics to the Black Sea, which most directly faces the Russian threat. So far, only Latvia, Lithuania, Estonia and Poland have such “battlegroups”, created in 2017 after Russia invaded Crimea.

This terrestrial system was supplemented by a reinforcement of the surveillance of the airspace of these same countries. Before the war, the members of NATO randomly contributed to the police of the sky of the various States, mainly of the Baltic countries. Since February, this system has been amplified and planes under NATO command now take turns permanently in the skies of exposed countries. These aircraft can take off from different European bases or aircraft carriers. France has notably sent a hundred airmen to Estonia, to patrol the border with Russia, where the approaches of ex-Red Army planes are regularly denounced by the Alliance.

According to official figures unveiled in Madrid, some 30,000 men are now made available to NATO in the eight countries most exposed to the Russian threat: 1,650 in Bulgaria (compared to 900 at the start of the war) , 4,500 in Romania (3,300 before February 24), 900 in Hungary… It is in Poland that the numbers are the largest, with 11,600 American, Croatian, British and Romanian soldiers under NATO command (10,500 at the start of the war). In the Baltic countries, the forces vary between 2,200 men in Estonia and 4,000 in Latvia. The United Kingdom took advantage of the Madrid summit to announce the sending of 1,000 additional troops to Estonia.

The defensive posture of Europe will nevertheless remain massively ensured by the Americans: the United States today aligns some 100,000 soldiers in Eastern Europe, adding those made available to NATO and those deployed in American bases. Figures are set to increase further following new announcements of reinforcements made by US President Joe Biden on Wednesday in Madrid.

Another sign of the Atlanticist mobilization, the member countries reaffirmed their determination to continue their efforts in terms of military expenditure, undertaken since 2014. According to NATO, nine countries out of the thirty of the organization already devote 2% or more of their gross domestic product (GDP) to defence. A figure now presented as “a floor” and no longer “a ceiling”. “Nineteen allies have clear plans to achieve [the 2% target] by 2024, and five more have concrete commitments to achieve it thereafter,” Stoltenberg said in Madrid. A time mentioned, especially in Washington, the idea of ​​​​raising this objective to 3% for European countries was however not on the menu of the discussions at the summit, assures the Elysée.

France is not the most lavish in this area. Its defense budget had only reached 2% of GDP in 2020 with the help of the contraction in economic activity linked to the Covid-19 epidemic. Since then, its military spending has peaked at 1.9%, compared to 2.3% for the United Kingdom, the good student of the European class, which has announced that it is aiming for 2.5% by the end of the decade. In Germany, Chancellor Olaf Scholtz, for his part, promised to make his conventional army the first in Europe, marking the end of the period of peace that began after the fall of the Berlin Wall more than thirty years ago. . Paris, for its part, promises to accelerate to reach the 2% threshold, hitherto planned for 2025. to take into account the geostrategic context and new defense priorities”, confirms the entourage of Sébastien Lecornu.

This increase in power is all the more essential since the Alliance has forcefully reaffirmed that it will support Ukraine without time limit. “Ukraine can count on us for as long as it takes,” Stoltenberg said in Madrid, citing a “moral and political obligation” for the Alliance. “Ukraine’s fight is ours (…), Russia cannot and must not win this war”, declared Emmanuel Macron himself at the end of the summit, assuring that the actions carried out to “mitigate the consequences” of the war, in particular on energy or agri-food prices, will be continued.

Faced with these offensive positions, Moscow unsurprisingly denounced the “imperial ambitions” of the Alliance, accused of pushing Ukraine into war to assert its “hegemony”. “Ukraine and the good of the Ukrainian people is not the goal of the West and NATO, but a means of defending their own interests”, defended Vladimir Putin, Wednesday, during a visit to Turkmenistan, his first to a foreign country since the start of what he continues to refer to as a “special military operation”. An “iron curtain, in fact, is already falling” over Europe, Russian Foreign Minister Sergei Lavrov said during a visit to Minsk on Thursday. A vocabulary hitherto reserved for the Cold War.