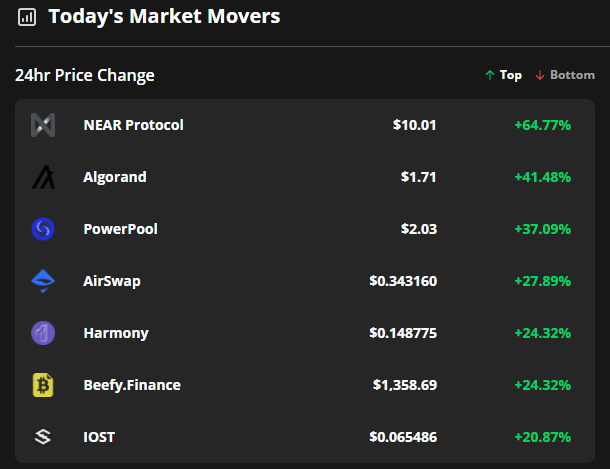 NEAR, ALGO, and CVP all posted gains exceeding 37% as the market tries to recover from Tuesday’s sharp correction.

The wider cryptocurrency market appears to be in the early stages of a recovery with many altcoins regaining their footing after correcting by 20% to 30% on Sept. 7 when Bitcoin (BTC) fell below $43,000.

Cointelegraph Markets Pro and TradingView data show that the largest gainers in the last 24 hours were NEAR Protocol, Algorand and PowerPool.

NEAR Protocol, the top-gainer, is a decentralized proof of-stake protocol that offers faster transaction speeds and lower costs to facilitate adoption of blockchain technology.

The spike in momentum for the project comes as it launches its METABuild hackathon event, which is offering more than $1 million in prizes to participants.

Algorand, a permissionless proof-of-stake pure blockchain protocol, focuses on speed and efficiency in transactions with the ultimate goal of becoming the foundation layer for the financial sector.

VORTECS(tm) data from Cointelegraph Markets Pro began to detect a bullish outlook for ALGO on Sept. 3, prior to the recent price rise.

Cointelegraph’s exclusive VORTECS(tm), Score is an algorithmic comparison between historical and current market conditions. It is derived from a combination data points, including trading volume, market sentiment and recent price movements, as well as Twitter activity.

The chart shows that the VORTECS(tm), Score for ALGO rose into the green zone on September 3 and hit a peak of 73 just 42 hours later. This was before the price increase of 62% in the following three days.

The uptick in interest for Algorand comes as the protocol prepares to launch decentralized governance features on Oct. 1 and the team is also building out its decentralized finance (DeFi) and nonfungible token (NFT) offerings.

According to data from Cointelegraph Markets Pro, market conditions for CVP have been favorable for some time.