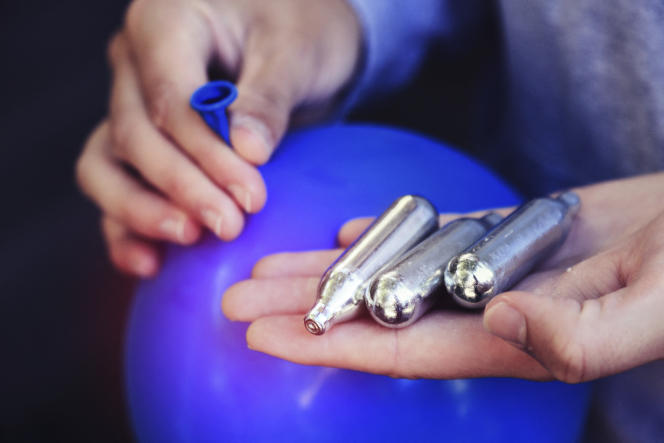 Nitrous oxide is prized for its brief, spellbinding effects. Euphoria, wavering state, giggles… Enough to justify its nickname “laughing gas”. Originally used in medicine for its anesthetic and analgesic properties, as well as in the kitchen in the manufacture of culinary siphons, the product is now popular among young people for its misuse. It is transferred into a balloon and then inhaled.

But this popularity is claiming victims. In a press release dated June 23, the French Association of Addiction Vigilance Centers sounded the alarm: it lists nearly 500 reports related to nitrous oxide in 2021, twice as many as in 2020 and ten times more than in 2019. These concern people aged 22 on average. “We are seeing more and more severe cases and complications that we did not have before,” worries Joëlle Micallef, professor of pharmacology, president of the network, who also directs the PACA-Corse addiction vigilance center. This development is all the more worrying as only a fraction of the cases are reported.

Four out of five severe cases are neurological in nature, as laughing gas can be toxic to the central or peripheral nervous system. The consequences are then varied: disturbances of sensitivity and walking, chronic pain or even incontinence. “We have a number of young and old who, once released from the hospital, have to go to a functional rehabilitation center,” says the pharmacologist.

These complications occur with disturbances in the metabolism of vitamin B12. The latter is used in particular for the production of the myelin sheath, which envelops the nerves. Nitrous oxide renders the vitamin non-functional, impairing the transmission of nerve impulses.

Other serious complications, this time cardiovascular, were observed in 2021. Vitamin B12 disorders also cause an increase in the concentration of homocysteine, an amino acid present in the blood plasma. Too high a homocysteine ​​level promotes the formation of clots in the veins. Then occur phlebitis, even pulmonary embolisms. A risk unknown to many doctors, maintains Joëlle Micallef. The professor insists on the importance of identifying the cases where the clots are linked to the inhalation of laughing gas. “Otherwise, the person may be treated for their phlebitis, but have a new one the following month, because they continue to use. »

A particularity of this drug is its legal aspect, explains Clément Gérome, researcher at the French Observatory of Drugs and Drug Addiction (OFDT). “This can play on the representations of users by minimizing the danger. Since 2021, a law prohibits its sale to minors as well as in places such as bars, nightclubs and tobacconists. But, in addition to shops, many websites allow you to obtain the product in a few clicks. “Small networks will buy wholesale and then resell, especially via social networks,” continues Clément Gérome. Containers have also evolved from small cartridges to carboys and bottles that can hold thousands of doses.

These phenomena may partly explain the increase in the number of reports. Clément Gérome nuance however. Most severe complications occur with heavy and repeated use. “However, we observe very largely controlled consumption in the festive uses of the product. Which does not mean that there are not more problematic cases, ”said the OFDT representative.

According to Joëlle Micallef, better risk prevention notably involves greater awareness of the precursor symptoms of complications. “Some users do not make the connection between their consumption of nitrous oxide and the appearance of symptoms such as muscle weakness or ants in the hands, she underlines. They delay consulting, which aggravates their problems. »