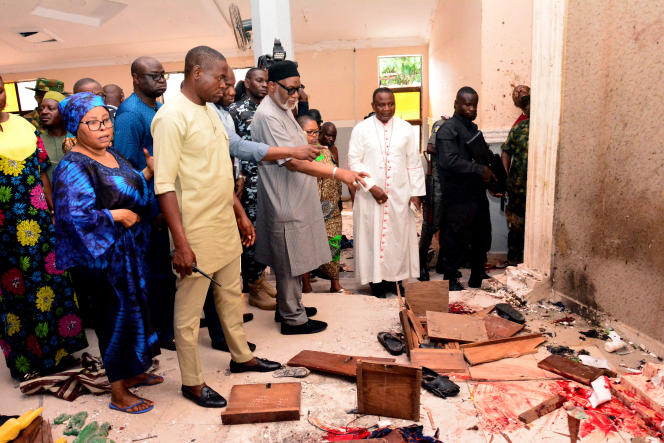 Days after gunmen massacred 40 parishioners at a church in Owo, southwestern Nigeria, the town’s imam, Ahmad Aladesawe, held his prayers in a virtually empty mosque. The frightened worshipers fled, said the imam, who announced that he had donated half a million naira (about 1,130 euros) to the local Christian community.

The perpetrators of this attack in a region usually spared from religious or ethnic violence have not yet been identified. The faithful of his mosque fear possible amalgamation and reprisals against the Muslim community.

The government said Thursday, June 9 that it suspected the jihadist group Islamic State in West Africa (Iswap) of having perpetrated this killing, more than 1,000 kilometers from its area of ​​​​activity. “It’s not about ethno-religious [violence],” Interior Minister Rauf Aregbesola insisted.

In Owo, Muslims and Christians often live together, under the same roof. Mr. Aladesawe says, for example, that two of his Christian relatives were injured in the attack. “One of my family members was shot in the back. She is still in critical condition in hospital. The other was shot in the leg,” he told AFP.

On Sunday, assailants used explosives before opening fire on the faithful gathered in the church to celebrate Pentecost, including children, leaving huge traces of blood on the ground in their wake.

High tensions and desire for reprisals

Police said they discovered three improvised explosive devices at the scene that did not detonate during the unclaimed attack. “What happened in Owo was unexpected to say the least, no one could have imagined,” Aladesawe insisted.

The violence, rare in the Southwest, has angered the local community, Ondo State Governor Arakunrin Oluwarotimi Akeredolu said on Tuesday, calling on residents not to take the law into their own hands. . “In Owo, the tension is high as well as the desire for retaliation. I ask our people to remain calm and vigilant. Let the government do the rest,” Akeredolu insisted.

Imam Aladesawe hopes that this recent killing will not damage relations between Christians and Muslims. “My grandfather had five children, three of them Muslims and two Christians,” says Mr. Aladesawe. We live together in peace. »

The massacre at the Catholic Church of St. Francis also drew widespread international condemnation, including from Pope Francis. Intercommunal violence is not uncommon in other parts of Nigeria, Africa’s most populous country, almost evenly divided between a predominantly Muslim north and a predominantly Christian south. In the northeast, jihadist groups have attacked churches during their more than a decade-old insurgency that has left 40,000 dead and two million displaced.