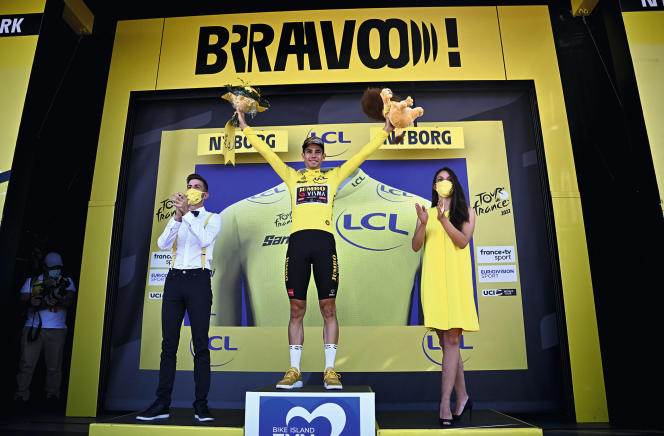 A boy a girl

He smiles yellow? It’s a bit like that. On July 2, at the end of a stage linking the two Danish cities of Roskilde and Nyborg, the so-called Wout Van Aert climbed on the podium of the Tour de France. The Belgian cyclist received the race leader’s yellow jersey, a Crédit Lyonnais plush toy, a bouquet of flowers, and that’s it. Since 2020, the tradition of the kiss offered to runners by two smiling hostesses has indeed disappeared. From now on, it is a mixed couple who takes charge of the ceremonial of the yellow jersey, in a much more sober way, and much less tactile.

While this new configuration obviously marks major progress, it is also the occasion for a relentless observation: while the outfit of the hostesses was once characterized by their lightness, that of the hosts is now distinguished by its heaviness. Thus, this poor young man, on the left of the podium, sports a terrible bow tie-yellow suspenders combo that makes him look like a waiter on the evening of an event sponsored by the Pastis 51 house.

If the choice of yellow obviously responds to the color code of the competition, and therefore to a marketing logic, one cannot help but wonder, despite everything, about the choice of straps. Why this lowest-end clip-on model? Why not opt ​​for a yellow belt instead of suspenders? And then why these skinny jeans that stand alone, and therefore do not require suspenders at all? And where the hell did his jacket go? We will probably be told that we ask too many questions.

On the other side of the podium, the hostess wears a loose trapeze dress. More consensual? Do not judge on appearance. While this dress is obviously not as horrifying as the previously mentioned pair of suspenders, it does carry some real controversy. Between the fans of Yves Saint Laurent swearing that it was the master who invented the trapeze dress, in 1957, while he was still working at Dior, and the supporters of André Courrèges, assuring that it was the couturier who created the model in the 1960s, the clashes remain of a rare violence.

Since the hero of this image remains Wout Van Aert all the same, let’s finish with a word on his outfit – and, more precisely, on his state-of-the-art cyclist, from the AGU brand, guaranteeing him a comfort that the sportsmen of the 1950s would have given him. urge. These were forced to slip, for the long stages, a cutlet of veal in their cyclist. With a density similar to human tissue, the meat reduced friction, cushioned shocks and prevented the appearance of boils… This too is major progress.