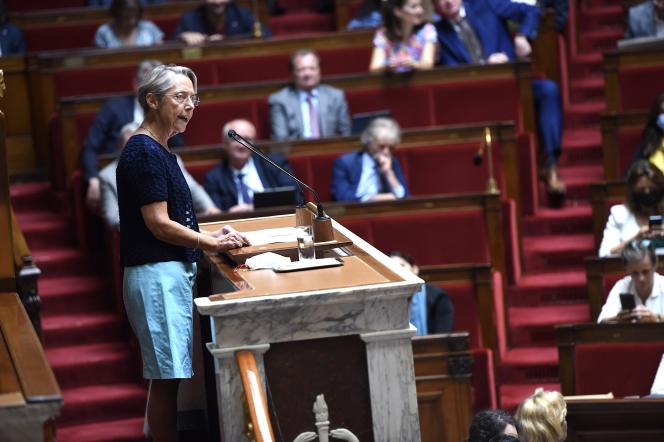 Only 146 votes for: the National Assembly rejected on Monday July 11 the motion of censure of the government of Elisabeth Borne, tabled by the New People’s Ecological and Social Union (Nupes). Not enough to overthrow the government, which would have required an absolute majority of 289 votes and was impossible without the votes of the deputies of the groups Les Républicains (LR) and Rassemblement national (RN).

The left alliance failed to fill up the 151 votes of the “rebellious”, socialists, ecologists and communists. Six socialists defected: Dominique Potier (the only one not to have signed the motion), Valérie Rabault, Hervé Saulignac, Cécile Untermaier, Joël Avignaret and Bertrand Petit. The only voter outside Nupes is the sovereignist Nicolas Dupont-Aignan.

“It was no surprise. La Nupes wanted to be counted”, reacted the Prime Minister, Elisabeth Borne, to Agence France-Presse, adding: “Now we get to work. For the government spokesman, Olivier Véran, “the Nupes congress is over”. “It’s a new defeat for Jean-Luc Mélenchon,” he said, recalling the results of the presidential election, the legislative elections and the ballot for this vote.

“The moment of truth has come. This motion of no confidence will serve as a political clarification “, had previously attacked the leader of the group La France insoumise, Mathilde Panot, facing the Prime Minister. “Those who will not vote for this motion of no confidence will be the supporters of your policy”, from pension reform to “the policy of damage and social injustice”, she added in a stormy atmosphere.

The motion was intended as a show of “defiance” towards Elisabeth Borne, who does not have an absolute majority in the National Assembly and did not seek a vote of confidence on July 7, during her policy statement.

“You do not derive your legitimacy from legislative elections or even from Parliament” and “you are, in this function (as head of government), a democratic anomaly”, had still launched Ms. Panot, in front of sparse ranks, especially in the majority .

Elisabeth Borne then scolded: “We are debating a motion of censure sewn with a trial of intent which is an obstacle to parliamentary work. “The French are tired of sterile dialogues and the law of postures,” added the head of government who last week called on the opposition to “build together” compromises in Parliament.

“You have taken on a little too much confidence”, had engaged the communist Pierre Dharréville (Democratic and Republican Left), while the socialist Olivier Faure had pointed to the “tacit majority” formed by the macronists with Les Républicains and “the risk of a majority of opportunity with the National Rally”.

But it is the leader of La France insoumise and artisan of Nupes, Jean-Luc Mélenchon, who “calls on the voices of the RN to come in support” of the motion of censure, had replied Aurore Bergé, the president of the Renaissance deputies. “The honeymoon is with you,” she scolded.

“You still don’t have our trust.”

For its part, the far-right group, in search of respectability, refused to vote in favor of the motion, seeking to embody “a dignified, firm, constructive opposition”, had justified Alexandre Loubet at the podium. “We don’t need a regime crisis,” he continued, denouncing a “sham motion.”

On the LR side, the same lack of support for the left-wing motion, perceived by some as “outrageous”. “You do not have our distrust today, but you do not have our confidence for all that”, justified in front of Ms. Borne their speaker Michèle Tabarot, whose group will judge on documents.

The “Uber Files”, these revelations by the International Consortium of Investigative Journalists (ICIJ) and 42 media partners, including Le Monde, have remained a distant subject. The left has only made simple allusions to the privileged exchanges between society and Emmanuel Macron when he was at Bercy. According to Mathilde Panot, the president “drives for Uber”.

In the evening, the Assembly must seize the bill on health security and its “braking measures” in the face of the resurgence of Covid-19, the first text of the legislature. It aims to extend health data collection systems (Covid tests, vaccination) and set up a health pass at the borders, if the health situation so requires.

The RN deputies or certain elected Nupes contest the entire bill and intend to put the health policy carried out on trial. Debates should heat up about the overseas territories. The text provides that the possible health pass at the borders applies for journeys between mainland France and overseas territories.