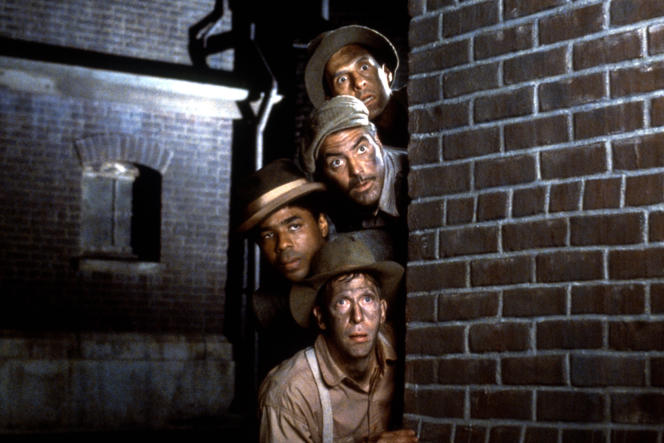 “Adapted from The Odyssey,” the Coen brothers, O’Brother’s screenwriters, proudly proclaim from the credits. Poor Homer is called to the rescue here, not to provide the plot for an amusing transposition of the tribulations of Ulysses, but to serve as a decoy, to confuse the spectators, to divert the plot.

Of course, the main character is called Odysseus. Ulysses Everett McGill, exactly. He has the face that American cartoonists of the 1930s gave to Clark Gable: the gomina, the conquering mustache, a circumflex eyebrow, he is interpreted by George Clooney. But the cunning Odysseus, the sage whom the kings of Greece looked to for advice, has been transformed into a smug boy, far less intelligent than he thinks. The kind to let themselves be robbed by the Cyclops, cheated by Circe, drowned by the sirens.

Then, this Ulysses is not a sailor, but a convict, detained at Parchman Farm, from which he escapes, at the start of the film, chained to Pete (John Turturro) and Delmar (Tim Blake Nelson). The trio embarks, with a very relative success, in a race against time: they must arrive at the farm of Ulysses within three days, in order to recover the spoils of a heist before the waters of a dam submerges the house.

Their Great Depression odyssey is punctuated by encounters. They meet a bluesman at a crossroads who has just sold his soul to the devil to play the guitar better, a blind radio host who has them record a traditional song, a one-eyed Bible seller (John Goodman), an outgoing governor and his fellow reformer, the local Ku Klux Klan chapter, and Mrs. McGill (Holly Hunter).

We can have fun deciphering these episodes, identifying the allusions, the diversions of meaning. Randomly from the tribulations of the trio, we discover a little bit of Elvis Presley (native of Tupelo, Mississippi), of which we glimpse a striking prefiguration, and a Ku Klux Klan ceremony that seems to be choreographed by Busby Berkeley. The Coen brothers are perverse people, who put as much care into perfecting their historical reconstruction as energy into dynamiting it. We see the mobster Baby Face Nelson (Michael Badalucco), who actually exercised his talents at the same time, but much further north.

In the end, it’s a lot of tiring for a disappointing result to want to find the deep meaning of this tangle of historical facts and false allusions, of myths torn from their natural environment and gags from cartoons of the 1930s. rather see it as the result of a raid organized by grown-up children in the attic of American myths. They brought back what they liked, because it was funny, pretty or original.