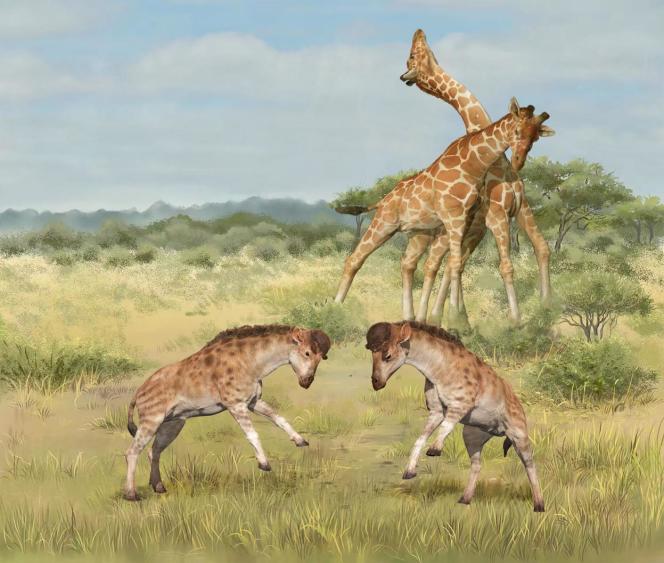 There are subjects that the columnist must approach with caution. Highly flammable, preceded by centuries of controversy, they place us precariously on the shoulders of giants. But how can you resist an article in the journal Science that claims to settle a fascinating, ancestral question that brings together the child and the scientist: the origin of the long neck of the giraffe.

For lack of a satisfactory hypothesis, the Greeks had kicked in touch: its dress and its appearance testified to the union of a leopard and a camel. Not convinced, Carl von Linné (1707-1778) named it anyway, in 1758, Giraffa camelopardalis, its current scientific name, borrowing in passing from the Arabic zirafa.

Which didn’t settle the neck issue. Past various eccentric hypotheses, the origin of its dimension symbolized the confrontation of two schools. By order of entry on stage, Jean-Baptiste de Lamarck (1744-1829) drew first. For him, the giraffe, eager to reach the upper leaves, had stretched its neck and transmitted this acquired character to its giraffes. And so on for thousands of generations. No, Charles Darwin (1809-1882) answered him a few decades later: like humans, giraffes are more or less tall, and the taller ones were favored, lived longer, enjoyed more offspring. A “natural selection” model.

In any case, both agreed on the central role of access to food. In 1996, however, two South African zoologists, Robert Simmons and Lue Schippers, proposed another hypothesis: that of sexual selection. To curry favor with the females, the males compete with each other with their necks. Like the large antlers of deer, the disproportionate cervical vertebrae would have been favored. As proof, the neck of the males is larger. To this theory called “necks for sex”, many replied that the sexual dimorphism of giraffes was nothing exceptional and invited the two revolutionaries to return to comb the animal.

Close ancestor of the okapi

The article published in Science, Thursday, June 2, by a Sino-Swiss team, however, takes up this theory. It is based on the discovery, in 1996, by Professor Jin Meng, of the Chinese Academy of Sciences, of a 16.9 million-year-old fossil in the Xinjiang desert: a skull and four vertebrae. . “He immediately saw that it was a strange animal, but first he thought of a bovid,” says Shiqi Wang, first author of the paper. Paleontologists continued excavations, accumulated material and it was in 2015 that a major study was launched. “A colossal work” bringing together “geochemistry, stress analysis, analysis of cranial appendages in histology, analysis of internal cranial structures”, details Loïc Costeur, curator at the Basel Museum of Natural History. He took care of the inner ear, an element that proved essential to the attribution of the fossil to the family of giraffidae.

A smaller ancestor is emerging, close to the current okapi – the cousin of the giraffes –, equipped with more robust vertebrae and a real helmet on the head, witness to violent clashes between males. Then comes the reasoning: an extreme sexual behavior in a primitive giraffe, another known sexual behavior in the current giraffe, always related to the neck and the skull, a variability of the cranial appendages in the fossil giraffids… “We therefore emit, and even confirm the hypothesis that sexual selection is the driver of morphological evolution in the extended group of giraffes, and that therefore the ecological benefit of the long neck in the current giraffe for the diet is secondary”, explains Loïc Costeur.

Pulled by the hair? “Paleontology accumulates clues and proposes hypotheses from fragments of evolution, the link is inferred and the hypothesis put forward serves to fuel the debate, it stimulates research in this direction”, continues Loïc Costeur. “Some will disagree, surely the controversy is not over,” admits Shiqi Wang. This time, neither he nor we take any risk in announcing it.

National Rally: anchored in the north, the party dreams of constituencies in the four corners of France after the legislative elections of 2022

News Editor - June 10, 2022 0
This photo is one of the few images from my childhood that have come down to me because our apartment burned down when I...

Capitol Assault: ‘Donald Trump was at the center of this conspiracy’,...

National Rally: anchored in the north, the party dreams of constituencies...