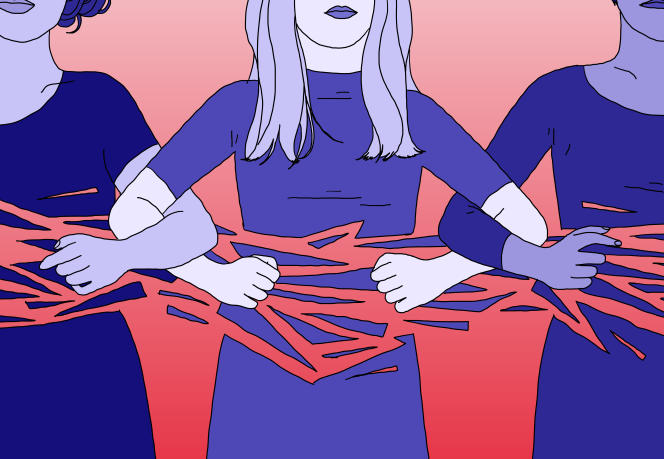 “You just have to tuck in your stomach and squeeze your buttocks”; “Anyway, you’re still tired”; “Your pain is in your head, I’ll give you an antidepressant”; “You just have a stomach ache, it’ll pass…like all girls your age”; “Ah yes, endometriosis…it’s the new trendy disease…”

We could blacken this page with testimonials collected on the Instagram account @balance_ton_endo, followed by nearly 13,000 subscribers. In a punchy fashion, they illustrate the prejudices faced by women with endometriosis. Friends, family, the general practitioner, the school nurse, the sports teacher… Those around you have an unfortunate tendency to minimize the evils of an invisible disease. For teenage girls, it’s a double jeopardy. “We don’t take them seriously and what’s more, it upsets their schooling,” laments Marie-Rose Galès, 32, patient expert, activist and author of several awareness-raising books for 15-25 year olds.

A growing number of young women are taking refuge on social networks, within communities where information sharing, mutual aid and sorority are promoted. “As we have often been sent flying, from doctor to doctor, we support each other and we give each other all our tips, says Sterenn Le Run, 22, at the origin of the @mon.endo account, on Instagram. Trading is ultimately easier online: that’s why the endo community is so strong. »

A common gynecological disease that affects one in ten women, endometriosis is “characterized by the abnormal presence, outside the uterine cavity, of fragments of tissue similar to that of the lining of the uterus”, according to the definition of the National Institute of Health and Medical Research (Inserm). It can be asymptomatic, but also affect different organs. If no specific treatment exists to date, the list of symptoms often seems endless: intense pelvic pain, painful and/or heavy periods, digestive disorders, difficulty urinating, chronic fatigue, etc. Endometriosis is the subject of a government action plan, launched in January. It aims to “better manage, raise awareness and diagnose endometriosis”.

Marie-Rose Galès was diagnosed in 2016 after crossing a “no man’s land” of more than fifteen years. She compares the disease to “a smart little monster, which does a lot of damage” since it can attack organs, nerves or tissues and cause painful lesions.

While it takes an average of seven years to diagnose the disease, Inserm estimates that 70% of women with endometriosis suffer from chronic disabling pain. Endometriosis is thus the first cause of absenteeism at school and the first cause of work stoppage in young women, according to the Assistance Publique-Hôpitaux de Paris (AP-HP). Hence, for some, heavy consequences on orientation and professional integration, so difficult is it to lead a student life like the others.

Sterenn Le Run was diagnosed in early 2020, after six years of medical wandering. The student reports the onset of symptoms when she was 13 years old. First ailments “more or less managed” with medication, physical manifestations that worsen, then discomfort in transport, weeks of absence bedridden… and doctors who often declare that “it’s it’s normal to have pain”. “I ended up losing patience and cracking up in their offices,” the young woman continues. Their speech did not fit with what I felt. »

As early as 12th grade, Sterenn Le Run remembers only being there three out of four weeks – “The week of my period, I was at home. “After her baccalaureate, she began an integrated preparation in an engineering school, but gave up, accumulating absences and anxiety. The following year, she enrolled at the University of Paris-Nanterre in engineering sciences. “In the first semester, I was going to class three days out of five. In the second, I could neither stay on a bench at the university nor take public transport. She fails and takes a blank year. It was there that she decided to reorient herself towards training in psychology, remotely this time: “Thanks to my Instagram account, I also understood that I wanted to help others. »

It is no coincidence either that, at the age of 22, Sixtine Fournier-Voquer opted for a master’s degree in health law and management at the Catholic Institute of Rennes, in the context of which she is on a work-study program. in an Ehpad in Mayenne: “I try to understand fragile people, their pain, their sorrows,” she says. After “a very big crisis of pain”, the student missed her exams in January. “To protect themselves and have legitimacy”, Sixtine made a request to the departmental house for disabled people (MDPH), in order to obtain recognition as a disabled worker and educational and professional accommodation.

All the young patients testify to this: it takes an athlete’s mind as the psychological impact of the disease is immense. An “abyss” that isolates, makes singular at an age when one would like to blend in with the crowd. Sterenn Le Run created his Instagram account a few weeks after discovering his illness. “To relieve myself and stop getting drunk around me, I wanted to express my anger after these years of wandering, but also to share with others everything I was learning. »

Pauline, 29, a recruitment officer in Lyon, has already lost her job twice. Diagnosed just before the first confinement of 2020, she experienced the sentence as a “big shock”. But the ultrasound is unequivocal: the lesions are numerous and significant. Pauline has to have surgery. “Psychologically, I was a shadow of myself,” she breathes. At work, I couldn’t cope. Even today, it leaves traces, you have to reclaim your body. What saves me is my surroundings and social networks. »

After a first video posted on TikTok, Pauline opened her @endo.neline account on Instagram. “It really helped me hold on,” she says. I found answers when doctors were overwhelmed. My community referred me to a pain center with an endometriosis unit…I don’t want anyone to go through a journey like mine. »

By dint of “posts” and other “stories”, therapeutic education is progressing, endometriosis begins to be detected more quickly, in younger women. “Five years ago, I did not see 14-year-old patients arrive with their mothers,” says Marc Even, 38, obstetrician-gynecologist at Foch Hospital in Suresnes (Hauts-de-Seine). “Trained on the job”, he had “vaguely” heard of the disease during his clerkship. Since the start of the 2020 academic year, pathology has officially entered the second cycle program of medical studies.

“There is a real impact of the networks: patients are made aware and come earlier and earlier,” continues the specialist, co-founder of the Pointgyn multidisciplinary centers dedicated to women’s health. “For better communication”, he was also advised to open his own Instagram account. “I observe young people on TikTok in my waiting room: it is also essential for us to transmit simple messages and to remember that there can be an objective cause for pain. »

Because, for health professionals, all these virtual crutches should not replace quality medical support. Places of free expression cannot be confused with places of knowledge. “The profusion of content on social networks can be encouraging and hopeful, but also be totally pejorative and dramatized, warns Sophie Younes, clinical psychologist and sophrologist at the Center for Endometriosis at the Paris Saint-Joseph Hospital. It shouldn’t become an obsession. »

On the networks, many present themselves as “endogirl” – a label they seem to adopt with pride. “The problem is it makes the stuff cute when there’s nothing cute!” Says Sterenn Le Run. Patient Marie-Rose Galès prefers to call herself “endowarrior” and quips about “Muggles” who are not part of the community – in reference to the term coined by J. K. Rowling, author of the Harry Potter literary series, which designates people without magical powers and unaware of the existence of the wizarding world.

“We have a real role to play in reconciling doctors in the field and young people on the networks, speaking the same language, restoring trust, calls out Hélène Antier, co-founder of the start-up Lyv – whose workhorse is ” empowerment” of women with endometriosis. A lot of false information circulates on these accounts. »

Chloé Moulin, 29, describes sixteen years of pain from which she emerges exhausted and traumatized. “The problem with online activism is that it’s online: we agree among ourselves, but what does that change in reality?” she asks. I was perhaps less isolated in my crusade, but that did not protect me from the violence of the medical journey. It gives the illusion that we are legion, when, in fact, we are alone with the doctors who decide. »

A 27-year-old agricultural engineer, Mathilde François prefers to see social networks as “a community that resembles a popular university”. “We put everyone’s knowledge in the common pot and we gain autonomy,” she says. The young woman is preparing a comic strip on the theme of endometriosis, evoking the difficulties of combining work and chronic illness. Another way to bring this disease out of the shadows.

News Editor - June 28, 2022 0
The Italian Matteo Berrettini, finalist last year and who was one of the favorites of this edition, announced, Tuesday June 28 on Instagram, his...