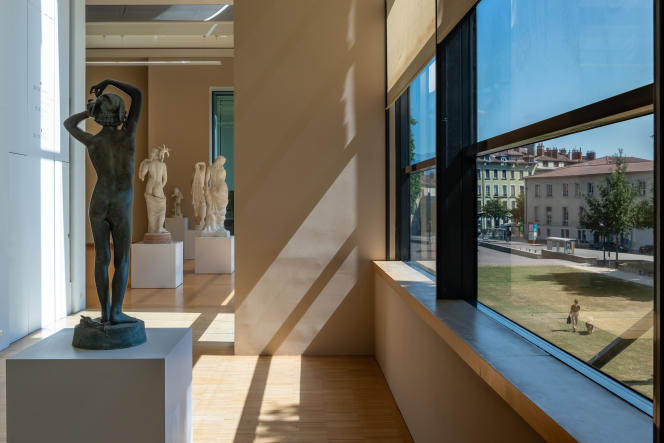 Discover superb collections of paintings and engravings, delve into history thanks to free museums, track down the beauty of concrete in the green city, discover the revival of cuisine there and then escape to the Bastille, five good reasons to linger in the Dauphiné capital.

From one masterpiece to another

One is huge, the other tiny, but the works that we discover there (in peace) are, in both cases, admirable. The Museum of Grenoble, one of the very first in France, is a vast space whose natural light highlights the canvases of Veronese, Rubens, Canaletto or Zurbaran, seized by the revolutionaries or donated by generous donors. Then, savvy curators expanded the collection with Matisse, Gauguin, Soutine, de Staël, the pop art of Warhol or the narrative figuration of Monory, without forgetting contemporary sensibilities. In the beautiful Sainte-Cécile convent, headquarters of the Glénat editions, the parlor has become “Cabinet Rembrandt”, a dark setting for 80 engravings by the master. Digital installations allow visitors to dive into some of these etchings, grandiose and powerful miniatures.

Do not leave concrete

The green city, elected European Green Capital 2022, was first a pioneer in artificial cement and concrete with the inventions of Louis Vicat in 1817. In the Jardin des Plantes, a small bridge created by Louis Vicat and his son is the first of the cast concrete type (1855). The neoclassical or Art Deco facades of the center are often made of artificial molded cement stones. A few minutes by tram, the Casamaures in its park is a 19th century orientalist madness all in moldings enhanced with blue. Unique in its kind, it owes its preservation only to the fight, in a private capacity, of an enthusiast, Christiane Guichard. Later (1925) and reinforced, the concrete of the Perret tower, finally, in the course of restoration, culminates at 95 meters above the Mistral park and that of the helical garage (1932) draws up its elegant Art Deco interior rue Bressieux.

It’s not just gratin dauphinois in life. Grenoble, which has never shone with its gastronomic offer, is discovering some appetite. Finally, the city has a Michelin-starred chef with Stéphane Froidevaux, awarded in 2021 for his restaurant Le Fantin Latour in his mansion. Young chefs rub their creativity against the now essential trinity: local, organic and seasonal. Chez Jeanette, Manon Bocquentin and Thaïs Giannetti offer natural and inventive cuisine; at Locafé, Michel Ariza and Claire Macaudière try their hand at the art of vegan gastronomy. The most inspired, Elie Michel-Villaz for Le Rousseau, is one of these new talents who are not afraid of tradition. He dares to rejuvenate sweetbreads, no offense to sensitive souls.

The museums managed by the department of Isère are free and offer some nice surprises. The Saint-Laurent Archaeological Museum is one which, behind the walls of a 19th century church, allows you to go deep into the bowels of the earth to a 4th century necropolis while discovering the work of archaeologists and anthropologists thanks to digital tools. In Vizille, in the castle where the assembly of the three orders sealed the beginnings of the French Revolution (July 21, 1788), the museum offers an original look at this turbulent period through its artistic representations (earthenware, paintings, sculptures). Another slice of history in Vif, in the Champollion family home, where, between archives, furniture and multimedia tools, a pleasant scenography evokes the life of the two brothers, the birth of Egyptology and the deciphering of the Rosetta stone.

Impossible to escape: the military fort of the Bastille, clinging to the slopes of the Chartreuse since the 19th century, is the tourist attraction of Grenoble. You climb there by cable car, symbol of the city since 1934, with its glass bubbles hung above the Isère. At the top, you can set off on several tree climbing, zip line or via ferrata routes. The less sporty can visit the Museum of Mountain Troops, but also a contemporary art center, or discover the immense view over the mountains and the city at the foot, with its new eco-district which raises its innovative buildings at the confluence of the ‘Isère and Drac. After lunch in the panoramic restaurant, you can, as a digestive walk, follow the fortifications and climb to Fort Saint-Eynard.