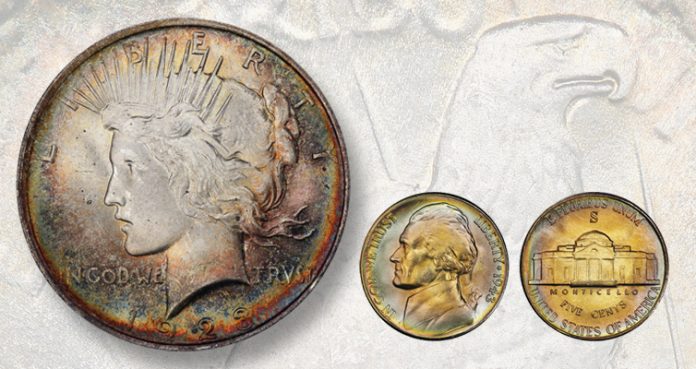 The American Numismatic Association World’s Fair of Money auctions will be held this year after the convention. Heritage’s floor sessions start in Dallas on August 18, with online sessions ending Aug. 22. ANA sessions at Stack’s Bowers Galleries start in its Costa Mesa offices on August 16 and end online on Aug 25.

Heritage’s website allows you to rank lots by “Most popular (Views).” It turns out that visually appealing collector coins in high grade with beautiful toning factors heavily in the most sought-after lots.

A 1923 Peace Dollar graded Mint State 65+ by Professional Coin Grading Service is one of the most popular Heritage coins. It features stunning rainbow toning, which is rare on this design type. A rich, orange color hugs the obverse with honey, sea-green and lavender accents. Liberty’s profile is crisp and clean. Similar to the obverse, the reverse is also toned.

The 1923 Peace Dollar is one of the most popular dates in the series. However, PCGS has only graded 313 MS-66+ coins with 108 finer. These examples are typically sold for between $600 and $700, but this example has an eye appeal that could help it rise above recent comparable auction sales.

Many of these “wartime Nickels” are silver-plated, which means they have beautiful toning. This MS-67+ full step by PCGS grade is one of 191 with three finer. Both sides display a variety of pastel colors with stronger jewel tones at their rims. In keeping with the PCGS definition “full steps”, the reverse shows five separate steps (lines), at Monticello’s base. A comparable-graded, untoned example sold for $720 at Heritage Auction earlier this year. However, collectors seem to be liking the attractive colors in the lot.

Who is J J on this dollar?

Stack’s Bowers Galleries’ online sessions include some amazing items, such as a selection U.S. counterstamped coin that was marked by merchants during the 18th and 19th century.

The auctioneer graded an 1803 Draped bust silver dollar Very Good. A neat hole covers most of the 8 and all 9 in the date. On the obverse, the letters “J J” are prominently stamped on Liberty’s side and on the shield of the eagle on the reverse. It currently has a bid of $160 as of August 2, but that is likely to rise as the closing date of Aug. 23 approaches.

A gold 1959 Nation of Celestial Space 1-Celeston, measuring only 14 millimeters in diameter, will also close on Aug. 23. It was struck on a 90%-gold planchet. James T. Mangan of Evergreen Park in Illinois chartered the Nation of Celestial Space in 1948. Ruth Mangan is the portrait. It draws inspiration from the 19th century U.S. Gold coin design and replaces the LIBERTY headband with the word MAGNANIMITY. It has been graded Proof 65 Cameo from Numismatic Guaranty Corp.

Mangan was committed protecting “outer space” against colonization by a single nation. His death in 1970 ended the movement. However, his efforts are still remembered in his silver and gold issues.