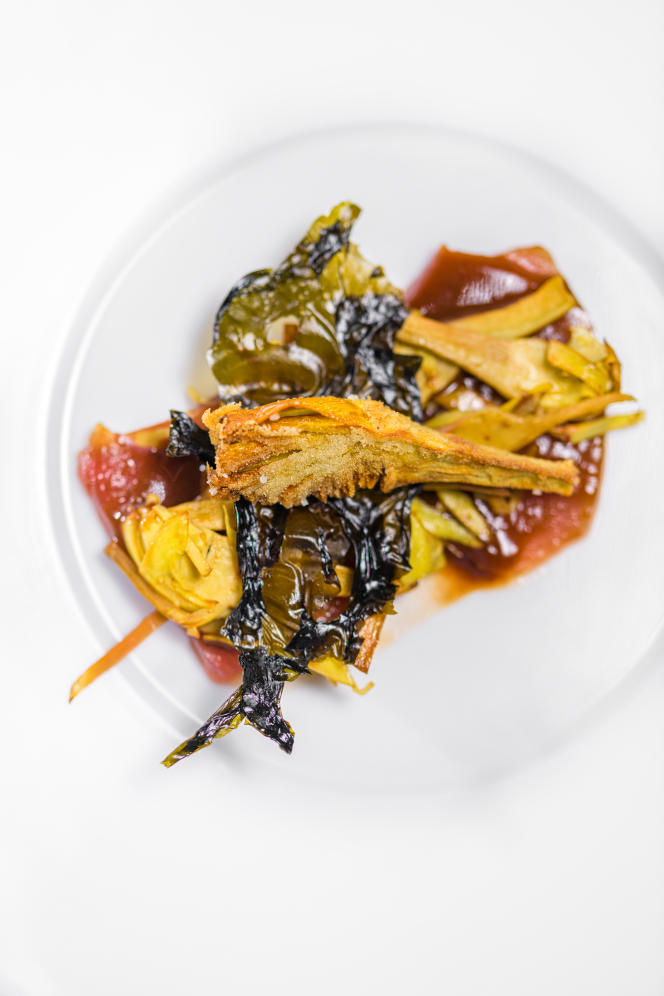 This iconoclastic chef from Saint-Etienne has been awarded three stars in Paris since 1998. At the same time, he manages around fifteen establishments around the world and has just taken over the stoves of the Villa Saint-Ange, in Aix-en-Provence.

“I was a bit annoyed when you asked me to choose a dish to write about in the newspaper. Am I able to show something that makes sense? Yes and no. Finally, yes, insofar as it is a dish representative of the cuisine that I defend. So there you have it, the “pocket cocktail”. That is to say amuse-bouche, but I hate this expression, I find it vulgar. While “pocket cocktail”, it slaps! It’s a little story for the customer, told in the intimate, a sequence very quickly tasted [six preparations that can be swallowed in one or two bites], where each element must challenge.

In a cocktail, there is the idea of ​​a crowd. And what makes my cuisine unique is the diversity. I want to please people and offer them the maximum. And then there is also a secret motivation. When I started my career, I said to myself: if I give a lot, in the pile, there will be at least one thing that will be good! [Laughs.] The challenge, in the six elements present, is that there is no repetition. And we completely renew the cocktail every three weeks: we refine it every day and when it’s very refined, it’s a sign that we have to stop. It may seem anti-commercial as a strategy, but I prefer emotion to outcome.

There really isn’t a set rule for crafting. The elements are independent, but they respond to each other. Sometimes, these are little nods to my daily life. The vegetable curry comes to me from a charity operation we did in March in Saint-Etienne, where we had to imagine a dish not too expensive for 600 people. Inside, there are parsnips, onions, apples, bananas… Yes, I know, today, you have to be a locavore, but the Martinique banana, I have the right, right? We’re not going to give up overseas! I am obviously attentive to sourcing, but I always have been and I don’t want to make a political argument out of it. I stopped the mangoes flown in from Peru, I’m not completely stupid.

I also let myself be inspired by the season and the beautiful products, like for these “raw slices of Mediterranean bluefin tuna, poivrade artichokes, wild seaweed”. Even though tuna is a fatty fish, I found it a little lean on the palate, so I added a layer of caramel to give it flavor density. I work on textures, stacks, contrasts of tastes. I have a fairly simple kitchen actually. Really. Infusions, decoctions, rotators to extract juices, it bothers me, it’s not me. I like this immediate, slightly wild side, boom!

As for the “square of buttermilk”, it is a fad of the moment. Like kefir or buffala, buttermilk does not really have a taste, but it has the merit of being tangy, and therefore exciting for the palate. I serve it with a vinaigrette of smoked parsley and slightly melted brillat-savarin in which some coffee has been infused. The idea is that we say to ourselves: “It’s good, but what is it?” Today, it seems sadly commonplace, but forty years ago I was insulted when I claimed that a turnip could have a function other than being a turnip. [The Guide] Gault

News Editor - June 26, 2022 0
This iconoclastic chef from Saint-Etienne has been awarded three stars in Paris since 1998. At the same time, he manages around fifteen establishments around...