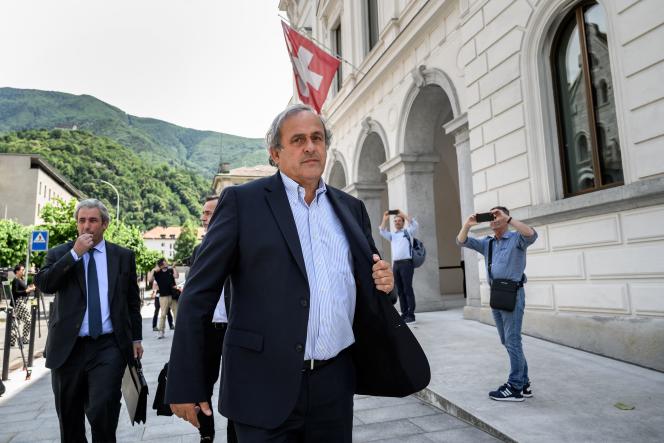 Michel Platini and Sepp Blatter had not seen each other since September 7, 2020 and the hearing of the former number 10 of the French football team at the headquarters of the Public Prosecutor of the Confederation (MPC), in Bern. At the time, the two men could already suspect that they would end up appearing together before the Swiss Federal Criminal Court (TPF) in the case of the alleged unfair payment of 2 million Swiss francs (1.9 million euros). ) made to Mr. Platini, in February 2011, by Mr. Blatter.

After more than six years of instruction, the former French president of the Union of European Football Associations (UEFA), from 2007 to 2015, and the former Swiss boss of the International Federation of Football Association (FIFA ), from 1998 to 2015, exchanged many pleasantries upon their arrival at 8:30 a.m. on Wednesday June 8 at the TPF in Bellinzona, in the canton of Ticino.

On the first day of their trial for “suspicions of fraud, disloyal management, breach of trust and forgery in titles”, MM. Platini, 66, and Blatter, 86, were in a playful mood in the halls of court. Between the two former leaders of world football, ex-allies who have become irreconcilable rivals, the formal address is however now de rigueur on the bench of the defendants.

“I hope I’ll be better tomorrow”

Epilogue of an extended political and judicial saga, this trial should bring back to the fore the latent conflict between MM. Platini and Blatter, whose common fall was caused by the opening of criminal proceedings by the MPC on September 24, 2015, in particular because of this “illicit” payment, according to the prosecution, of 2 million Swiss francs. At the time, the Frenchman had seen his candidacy for the succession of Mr. Blatter torpedoed by the investigations of the prosecution.

The two defendants – who risk a maximum sentence of five years in prison – repeat that this payment corresponds to an arrears of wages under an oral agreement in which Mr. Blatter would have undertaken to pay 1 million Swiss francs annually to the French for his mission as technical adviser to the FIFA presidency (1998-2002). The MPC does not believe in this version and believes that the “illegitimate double enrichment” of the Frenchman “was achieved by the compensation of 2 million Swiss francs” as well as “the settlement of Platini’s social security debt assumed by FIFA”, i.e. 229,126 Swiss francs.

The hearing of Mr. Blatter, accompanied at the hearing by his daughter, Corinne, was scheduled for Wednesday morning. Due to the state of health of the Valaisan, authorized by his doctors to appear only for four and a half hours in the morning, this interrogation was postponed to Thursday morning, before that of Mr. Platini. “My client has chest pains, he is not able to withstand this interrogation,” his lawyer, Lorenz Erni, told the court. “I’m not well, I can’t breathe well. I hope I will be better tomorrow,” said the octogenarian.

If the president of the court, Joséphine Contu Albrizio, acceded to the request of the ex-boss of FIFA, she rejected all the preliminary questions raised by the defense of MM. Platini and Blatter.

Mr. Blatter’s lawyer unsuccessfully argued that FIFA could not become a plaintiff in the proceedings, insofar as its executive committee should have validated such a legal action brought against two of its members. “FIFA is wronged. 2.29 million were stolen, retorted Catherine Hohl-Chirazi, the lawyer for FIFA, who intends to be returned this sum at the end of the trial. FIFA asserts its rights so that crime does not pay. »

Moreover, Mr. Platini’s lawyer did not win his case when he tried to obtain the divestiture of the TPF for the benefit of another jurisdiction and questioned the “federal jurisdiction” of the MPC. The tension rose a notch when the Platini camp reiterated, before the TPF, its request for access to the criminal file of the investigation carried out by two extraordinary prosecutors and which targets the current FIFA President, Gianni Infantino, for “incitement to abuse of authority, violation of official secrecy and obstruction of criminal proceedings”.

This criminal investigation was opened in July 2020, and relates to three secret meetings (without minutes), in 2016 and 2017, between Mr. Infantino and the former Attorney General Michael Lauber, in charge of investigations in connection with FIFA between 2015 and 2019. To date, six people are targeted: MM. Infantino and Lauber as well as André Marty, former spokesman for the MPC, Rinaldo Arnold, childhood friend of Mr. Infantino and prosecutor of Haut-Valais, the former legal director of FIFA Marco Villiger, and the ex-prosecutor Olivier Thormann, who opened the MPC investigation into the payment made to Mr. Platini.

While Mr. Thormann is to be heard as a witness by the TPF on Thursday, Mr. Platini’s lawyer, Dominic Nellen, repeated that “the procedure of the two extraordinary prosecutors has a direct impact on the present case”. It is based on a disciplinary report from the Swiss Public Prosecutor’s Supervisory Authority of March 2020.

This document concluded that Mr. Infantino had sought in July 2015, through his friend Mr. Arnold, to obtain information on the ongoing proceedings of the MPC concerning him and MM. Platini and Blatter. Due to lack of evidence, this thesis had not convinced the Federal Administrative Court in July 2020. “The defense of Mr. Platini is trying to erect a wall of fog with his favorite story, his conspiracy theory”, replied the FIFA lawyer.

The first day of this high-profile trial was also marked by the reunion between Mr. Blatter and prosecutor Thomas Hildbrand, who completed the instruction on the payment to Mr. Platini. Mr. Blatter knows the magistrate well, originally from Visp (Valais), his hometown. He had investigated the bribes received by the ex-president of FIFA, the Brazilian Joao Havelange, within the framework of the International Sport affair