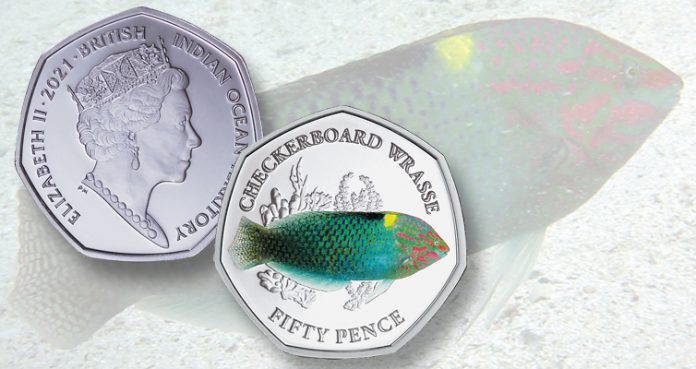 The latest Pobjoy Mint Sea Creatures 50-penny series will feature an intriguing wonder of nature that can be found in the Indian Ocean, and other nearby bodies of water.

This is the fourth design in the series for 2021, and was issued by the British Indian Ocean Territories.

Small-sized fish ( Halichoeres), found in sea reefs and lagoons, have the distinction of undergoing transformation during their life cycle. All fish are born as females and depending on social cues can become males.

The age of the fish also affects the color. Juveniles have white stripes, dots, and black patches. They develop a black checkerboard pattern over a silver-green body with other colors.

There are two versions

These 50-penny offerings feature the mature checkerboard weaver. There are two versions of the Proof.925 fine-silver coin, and one that is uncirculated in copper-nickel “Diamond Finish”.

All previous Sea Creatures coins were offered in the same finishes.

The reverse features the featured fish swimming alongside a coral reef while the obverse displays the Pobjoy Mint exclusive Queen Elizabeth II effigy.

Protective pouches are included with the copper-nickel coin. The sterling silver coin comes with a clamshell presentation box and a certificate of authenticity.

As an additional purchase, a special color album can be purchased for each of the six coins in the Sea Creatures series. The chagos anemone and the powder bluetang were previously featured in previous releases.

Both coins can be pre-ordered at press time on June 15th, with delivery expected to start June 28.