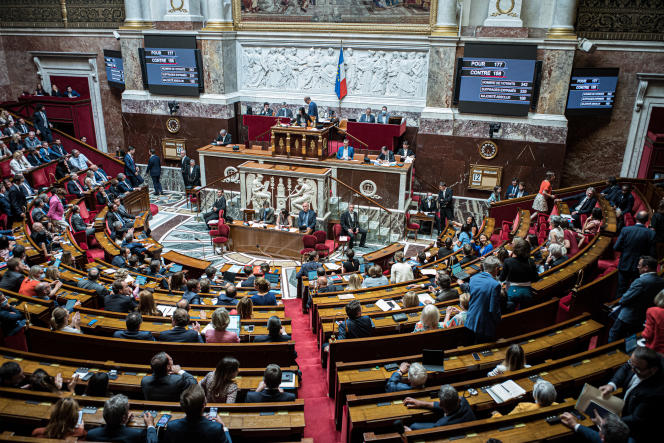 Campaign promise in the face of galloping inflation, the bill on purchasing power and its support measures arrive Monday, July 18 in the Chamber of the National Assembly, where the opposition will storm aid proposals new.

The bill of twenty articles “on emergency measures for the protection of purchasing power” passes first reading until Thursday, July 21, with more than a thousand amendments to the key. MEPs will continue with the examination of the draft amending budget for 2022, which should make it possible to finance and supplement these measures.

Among the main ones are the early increases of 4% of retirement pensions and social benefits, the 3.5% increase in the salaries of civil servants, a means-tested food check of 100 euros, to which will be added 50 euros per child. There is also the extension of the discount of 18 cents on fuel and the tariff shield on energy, the abolition of the audiovisual license fee or the tripling of the Macron bonus (tax-free and exempt from social security contributions).

The final adoption, after a shuttle with the Senate, is scheduled for August 7, if the government’s plan goes as planned. Because, for lack of an absolute majority, the game promises to be difficult for the macronists if they want to maintain the financial “balances”.

“No group, no political party, no deputy has an interest in saying, at the end of the week, that this text is not adopted, because if it is not adopted, that means that the power purchase of the French will not be protected “, warned Aurore Bergé, the president of the Renaissance group (ex-La République en Marche) at the National Assembly, on BFM-TV.

During the past week, the government suffered a first setback on the health bill, amputated from a key article on the possible return of the health pass for entries into France, as part of the fight against the pandemic. of Covid-19. It’s time for mobilization on the majority side on this text “the most awaited by the French” and a high stake in the presidential and legislative campaigns.

Faced with high inflation (5.8% over one year in June), the Republican deputies are pushing in particular for the “lower fuel price to 1.5 euros per liter”; those of the RN, for the reduction of VAT on energy prices. The left-wing alliance New Popular Ecological and Social Union (Nupes) will decline in amendments its own “social emergency” text with an increase in the minimum wage to 1,500 euros or the taxation of the “superprofits” of large groups.

“I’m not saying that everything is to be thrown away, I’m saying that the political logic behind this text is a logic that we reject,” he said. For the rest, in this text, there are things which are extremely serious and which are presented as extremely positive things for the French. When we cap the increase in rents at 3.5% (…) for an average rent which is 700 euros, that means that you will lose 300 euros in purchasing power in the year, explains the deputy of Bouches- of the Rhone. You can call it “law to increase purchasing power” if you want, but in the end it is a law that will result in a decrease in purchasing power. So it’s not true, it’s false advertising. »

“I would like to know what compromises the power is ready for”, asked Olivier Faure, the first secretary of the Socialist Party on Europe 1, who warned that he would not be satisfied with “approve the copy” of the government.

No “demagogy” but “serious budgetary”, had warned the President of the Republic, Emmanuel Macron, in his interview of July 14, wanting to believe in “the spirit of responsibility of the political forces in the Assembly” .

The Minister of the Economy, Bruno Le Maire, castigated Monday, on RTL, the “financial madness” of the oppositions, with their 100 billion euros of proposals, while the salvo of aid discussed this week is quantified at one twenty billion euros and that the guardians of public finances like the Court of Auditors are already ticking.

However, he reached out to the Republicans, saying he was open to further tax exemption for overtime – as voted in committee – and to expand compensation for those who use their vehicle to go to work.

“We’ll see, we’ll watch, the debate opens this afternoon, replied the deputy of the National Rally Sébastien Chenu, on the set of RMC, Monday, to the question of whether the National Rally would vote in favor of the Purchasing Power Bill. “This is an extremely important text. We have already lost a lot of time. Since the election of Emmanuel Macron, nothing has been done for the purchasing power of the French, “lamented the RN deputy from the North.

News Editor - July 18, 2022 0
The heat is increasing, Monday, July 18, at the height of the heatwave episode which is hitting France: the map of France has turned...