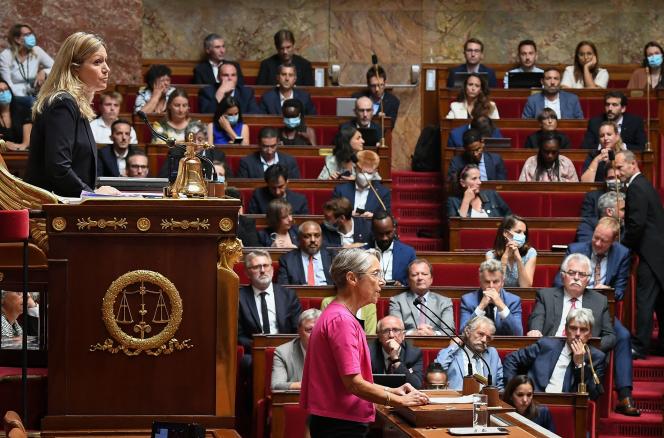 Appearing before a defiant Parliament, where she does not have an absolute majority, Elisabeth Borne delivered her general policy statement on Wednesday July 6. The Prime Minister unveiled her method and her program, at the forefront of which is the long-awaited bill on purchasing power, presented Thursday in the Council of Ministers.

Here’s what to take away from his speech:

According to Ms. Borne, “our first challenge is to respond to the urgency of purchasing power”. She recalls that “many measures have been taken since last fall”. Without them, she said, electricity prices would have risen by a third – instead of 4% – and gas prices by 45% – instead of “blocked prices”. Thanks to this reaction from the government, “our inflation is the lowest in the euro zone,” Ms. Borne said.

Elisabeth Borne confirmed before the National Assembly the government’s decision to abolish the audiovisual license fee and to initiate a reform of the financing of public broadcasting.

The Prime Minister considered that full employment was “within our reach” and said she had “a deep conviction” that France “can break out of the vicious circle of mass unemployment”.

At 7.3%, the French unemployment rate is “the lowest for fifteen years”, a consequence, according to her, of the reforms of apprenticeship, unemployment insurance, investment in the training of job seekers. employment and the “1 youth, 1 solution” plan. To achieve full employment, “we must bring those furthest from the labor market back into employment,” she said.

Without providing many details on the timetable, the former labor minister warned that the French should “work gradually a little longer”. “Our country needs a reform of its pension system”, a reform which “will not be uniform”, which “will have to take into account long careers and hardship” and “ensure the continued employment of seniors” , added the Prime Minister, who specified that this reform would be carried out “in consultation with the social partners, by involving parliamentarians as far upstream as possible”.

The Prime Minister promised “radical responses to the ecological emergency”, whether “in the way we produce, to house ourselves, to move around, to consume”.

“As of September, we will launch a broad consultation with a view to an energy-climate orientation law”, she added, promising to define “sector by sector, territory by territory” “objectives of reduction of emissions, appropriate steps and means”.

The State also intends to renationalise 100% of the EDF group, announced Elisabeth Borne. “This development will allow EDF to strengthen its ability to carry out ambitious and essential projects for our energy future as soon as possible,” she told the National Assembly.

Ms. Borne referred to the “first 1,000 days” policy to promote equal opportunity. “In line with the ‘First 1,000 Days’, we will address the number one concern of parents today: the lack of childcare options, especially children under 3 years old,” she said. declared. (…) My government wants to build a real public service for early childhood with the local authorities. It will make it possible to provide the 200,000 missing reception places. »

“My government will continue to roll out universal national service [UNS],” the Majority Leader continued. For her, “the future of our youth, finally, goes through higher education and research with the means of its ambitions. The university will therefore be at the heart of the action of our government”.

The executive also wants to make the Culture Pass accessible from the 6th grade, which currently allows 15-18 year olds to have a budget to buy cultural products.

“The Ségur de la santé has allowed unprecedented increases in the salaries of caregivers and unprecedented means for the hospital”, supported the Prime Minister by addressing the theme of health, and “our health system is now preserved even if you have to remain “vigilant” in his eyes.

In unison with Emmanuel Macron, who has already mentioned a form of decentralization of health, Elisabeth Borne assures that “the solutions will come from professionals, elected officials, patients and the field”. She announces “consultations from September” to fight in particular against medical deserts. It is also necessary “to allow the recruitment of 50,000 nurses and caregivers by 2017”.

Regarding old age, it is above all a question of “giving the elderly the ability to age serenely at home”. On the subject of disability, which according to her affects “12 million French people”, Ms. Borne supports the construction of an “inclusive society”. She announced a national conference on the subject at the beginning of 2023. She finally recalled the government’s ambition to deconjugalize the allowance for disabled adults (AAH), as demanded by the associations.

The Prime Minister then opened the territories section. For her, “communities need visibility and stability in their jurisdictions”.

“In Corsica, the cycle of discussions initiated with elected officials and the living forces will be relaunched in the coming days. We must come up with concrete solutions for all Corsicans, and in particular the youth, promised the Prime Minister. Concrete solutions for work, for housing, for ecological transition, for economic development and security. We are ready to open all subjects, including institutional ones. »

Ms. Borne then spoke about the overseas territories. “A few days ago, all the overseas communities came together to launch the call from Fort-de-France. We will answer them, she said. My government will support them to support economic development and create jobs, to strengthen the presence of public services and ensure safety, to improve, with the communities, the distribution of drinking water, sanitation, waste treatment . To act on all the causes of the expensive life, as in France. »

She also had a word for New Caledonia, which recently voted against its independence, in a ballot marked by strong abstention. “We will have to write the future of our relationship at the end of the political process defined by the Nouméa agreement. Discussions will be initiated with all parties,” she said.

“There are many challenges against daily insecurity, against cybercrime, against trafficking”, assured the Prime Minister, then referring to the creation of 200 gendarmerie brigades and 11 mobile force units. In criminal matters, she mentioned the creation of 15,000 prison places and the recruitment of 8,500 magistrates and judicial personnel.

“Sovereignty is neither inward-looking nor exclusionary. On the contrary, it is our capacity to weigh and to face the crises”, affirmed the leader of the majority, who underlined that “the pandemic has proven to us our too strong dependence on foreign industries”.

On a more economic side, the Prime Minister announced that the business value added contribution (CVAE), one of the production taxes paid by businesses, will be abolished “from the 2023 finance law”. “In concrete terms, nearly 8 billion will make it possible to strengthen the competitiveness of our businesses, three-quarters of SMEs and [medium-sized businesses],” she said, adding that this loss of resources for local authorities will be compensated.

The Prime Minister also said that she wants to see border controls strengthened. “In terms of irregular immigration, we will continue our fight at all levels. We will create a force at the borders,” she said, before concluding her speech with a pledge: “I am committed to building ambitious compromises without compromising on values, concrete solutions, majorities of projects and ideas. »