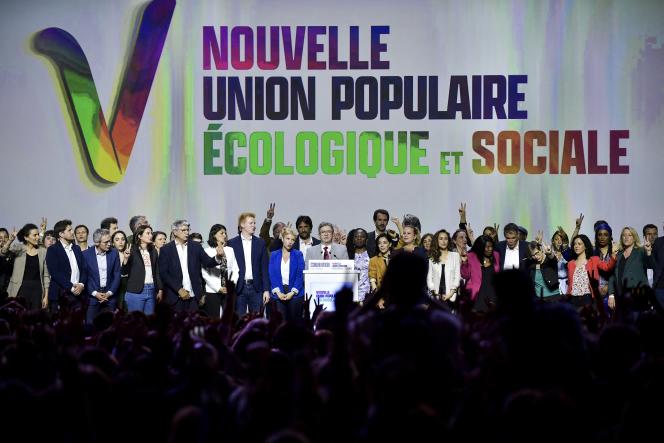 Albert Thibaudet, literary critic and “founder of the history of political ideas” according to René Rémond, created the neologism “sinistrisme” (from the Latin sinister, left) to designate the fact that left-wing political parties are gradually being replaced by new parties, more radical, which deports those born earlier to the right; these, however, continue to call themselves “on the left”, the camp of political innovation, if we follow Thibaudet.

This sinister movement has marked all of French political life since the Revolution. This is how, under the Third Republic, republican radicalism shifted from the extreme left to the center left, undergoing the pressures of a more socializing movement, which reached its peak at the beginning of the 20th century with the SFIO. , which will in turn be rejected towards the moderate left by the French Communist Party, which will itself have to bear the battering of the Trotskyists from May 1968.

Jean-Luc Mélenchon, well aware that the movement of ideas tends to take place from left to right, defended in his programmatic book L’Humain d’abord, on the occasion of the 2012 presidential campaign, a position in total conformity with this dynamic of sinisterism, emphasizing that “the Left Front was born from the demand to reinvent the left” and that it was absolutely necessary “to upset the situation on the left”.

Especially since the right-wing ideas that had until now been contained by the sinistrogyre movement are regaining ground, pushing to the left those who occupy its political space, a phenomenon theorized by Guillaume Bernard under the name of “dextrism”. Let’s risk the hypothesis here that it was the opposing pushes from the left and the right, at the same time, which enabled Emmanuel Macron to win the presidential election of 2022.

This singular kinetics would have favored a center, which he aims to reinvent, capable of welcoming his political project, which he calls “extreme-center” (on France-Culture, April 18) as opposed to the two other political blocs; this label, seemingly oxymoronic, intends to combine the radicalism of convictions and intermediate positioning.

Thus, in this triangle of extremes, it is all the importance previously recognized in the cleavage between the right and the left which is diminished, even erased. Jean-Luc Mélenchon was aware of this phenomenon. This is what led him, at the end of the 2012 presidential election, to break with his initial objective of forming a Left Front to plan to “give birth to a people’s front” (Liberation, September 12 2012), which he later clarified: “My challenge after having put an end to the initial project of the Left Front is not to unite the left, a very confused label, it is to unite the people. (Sunday newspaper, April 2, 2017).

It thus carries out its “turn of the people”, to use the expression of the Spanish radical movement Podemos, whose action is guided by the observation that “the system is no longer afraid of the left, it is afraid of the people”. Of this, Jean-Luc Mélenchon is convinced, who calls Union Populaire the formation formed in support of his candidacy for the presidential election of 2022; this then extended in the form of a coalition, integrating the Communist Party, the Socialist Party and Europe Ecologie-Les Verts, called Nupes (New Popular Ecological and Social Union).

In this acronym, it is the letter P which occupies the central position, to obviously express the centrality of the people in the (populist?) project of Jean-Luc Mélenchon. But this people, whose signifier no longer refers to a political abstraction but refers to the real life, sensitive and concrete, of each person, suffers from a lack of representation that the undisputed leader of Nupes intends to embody by claiming to be ” elected” as Prime Minister.

Will he become this “man-people”, like a Hugo Chavez who hammered during the 2012 presidential campaign in Venezuela the formula of the Colombian leader of the 1930s-1940s Gaitán: “I am not a man, I am a people”? Or will it stick to “La République, c’est moi”?