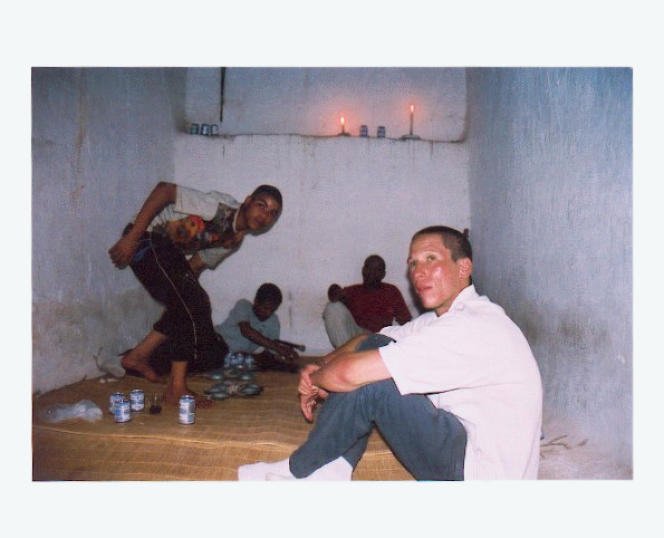 These images were taken twenty years ago, in the province of Essaouira, Morocco. We were installed in a zaouia, a sacred place in which the tomb of a saint rested, for a recording of Gnaoua music. It was a project that I had set up with my friend Pierre Willer, whom I met during a theater internship at the University of Saint-Denis during the strikes of 1995 and who is now a director at France Musique.

The city of Ivry-sur-Seine had paid for our plane tickets. The mission was to record an album with traditional musicians under typical conditions. It took us almost three weeks of preparation to gain the trust of the musicians and put everything in place. Then one night, the night these photos were taken, we recorded the whole album: we met the caretaker, we settled in quietly, we had dinner, and then they played until 4 o’clock. in the morning.

I had discovered this musical genre a year earlier, during a backpacking trip to Essaouira that I had been able to afford after working for a year in a call center. Before that, my introduction to music had mainly taken place at the Ivry conservatory. In my family, styles coexisted, from Brassens to Anne Sylvestre or Tom Waits, and, when I went on vacation to Algeria, Egyptian music or chaâbi.

Echoing the chains of slaves

As soon as I heard Gnawa music, it hit me in the stomach. It is a ritual genre, that of a brotherhood, played by the descendants of former slaves from black Africa, on the same principle as the blues or the negro spiritual in the United States. The bass guembri is the main instrument, to which are added large metal castanets that echo the chains of the slaves – chains that are symbolically ringing with the rage to make them jump.

The lyrics are related to the Koran and the music expresses the spirit of the ancestors, Africanity and its traditions. It is often played in the month preceding Ramadan, the most conducive to rites. It’s a music that always accompanies me, even if I haven’t had the opportunity to come back to Essaouira recently – years ago, I just went to eat sardines on the port, in a breeze on another trip. I would like to go back, maybe this summer or on All Saints Day. In the meantime, I listen to gnaoua, I continue to play a little guembri and to sing, as a dilettante.

Gnaoua, played during ritual nights that can be compared to voodoo, is credited with therapeutic virtues. I have always felt them. There is something that speaks to my body, capable of putting me in various states as there are so many colors in this music. In the end, she leaves me calm.

Acting itself is not so far from it: it is also a rite where one is possessed by characters, by stories. It is also a question of letting yourself be crossed. Accepting to be like a musical instrument, being both the instrument and the instrumentalist, and being able to make the best vibration possible.