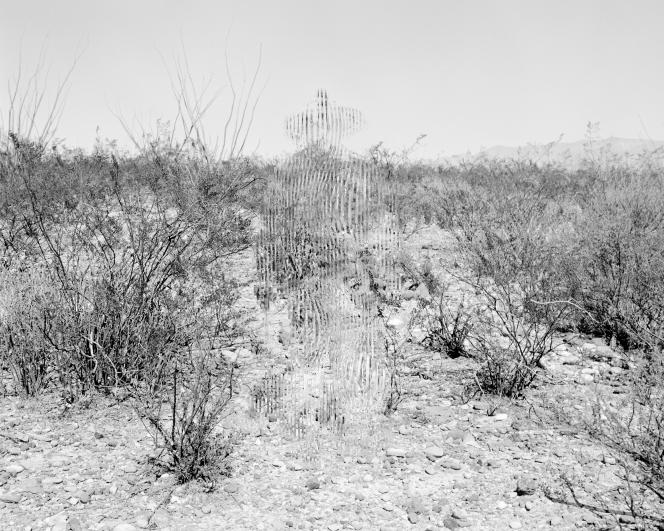 The site of Wirikuta, nestled in the heart of a desert valley in Mexico, contains all the ingredients likely to attract Westerners in search of a noble cause and ancestral wisdom. Indians, the Huichol, who fight to preserve this sacred land where, according to their beliefs, the sun was born. Mining industries seeking to profit from the subsoil. A unique biotope in the world, with many species on the verge of extinction. And, finally, a hallucinogenic cactus, peyote, used in rituals.

But after being invited to participate in an Indian ceremony on site, photographer Julien Lombardi found himself immersed in a particularly complex territory, where many different actors intersect: Indians, activists, anthropologists, ecologists, industrialists, tourists, peasants… Five years of back and forth between France and Mexico, where he is now based, were necessary for him before being able to present, at the Rencontres d’Arles, an installation in the form of a polyphonic narrative mixing all kinds of images, made by him or by others, which prohibit any simplistic or Manichaean vision. “I tried to show the multiplicity of points of view by delving into the visual memory of the place,” he sums up.

Trained in anthropology, which he abandoned “in favor of more speculative narratives, which the visual arts allow”, Julien Lombardi nevertheless retained the methods of scientific collection, accumulating materials of all kinds which enlighten the actors present. . In a disused mine, he thus found old advertising brochures which present the mining activity as a further step in human evolution, promising infinite growth and a bright future, with soon mines on the Moon… is not very far from New Space, the current private space conquest,” he remarks. He also reproduced the route of the only passage of the Google Car in the region. Or traced the trail of anthropologists who, influenced by the new age movements, were fascinated by the Indians in the 1970s.

In Wirikuta, it is actually not two but three visions of the Earth and the world that clash. Faced with the Indians who defend a sacred nature, preserved from all human intervention, stand the proponents of extractivist capitalism, often foreign companies that exploit natural resources to profit from them. But there are also the rancheros, peasants who practice animal husbandry or extensive agriculture. “If we make the territory a nature reserve, there is a risk that more Mexicans will turn to illegal immigration,” notes Julien Lombardi.

This one warns against the Western vision, often idealized, of the combat of the Indians. “There is the idea that they are pure beings who should be preserved from a corrupt world. But the people who live in Paris and who invoke Mother Earth, who make the Indians “the” solution, are into exoticism… which is a colonial spring. Indians live in the contemporary world, he points out. “They know their rights, they include academics, activists, media in their struggle. Some went to the city to train at university, became jurists, lawyers to defend their culture. It is a fight much more political than traditional or ethnic. He also notes that the mobilization in favor of the Indians and against mining, highly publicized in 2012 with the organization of an international concert, has not only had positive repercussions: it has made Wirikuta a mecca for Western tourists in search of mysticism and “authenticity”, promoting drug trafficking and disrupting the local economy.

Paradoxically, while they are at the center of his project, the Indians only appear in a roundabout way in his images: distant silhouettes, a group as if irradiated by the campfire, a man with closed eyes – present but elsewhere. Julien Lombardi did not produce any close-up or face-to-face portraits, to move away from classic representations – documentary or anthropological – of the Indians. “Westerners have taken over the representation of the other. Traditional images reproduce relationships of authority and domination. Even me, I participate in that: I arrive on site with equipment that they cannot afford, so we cannot speak of a balanced relationship. Rather than “shooting flash shots in people’s faces”, he therefore preferred to create hollow portraits. Even if it means resorting to machines without a point of view, such as those infrared cameras with automatic triggering used during ceremonies to give birth to unreal, dreamlike images. “It also allows me to participate in the ceremony instead of taking pictures!” »

His images also mix documentary and fiction. Various manipulations allow him to approach Indian beliefs and invisible forces through the fantastic, magical realism. “I had to find ways to evoke spirituality without doing cultural appropriation,” says Julien Lombardi. The ox becomes a magical deer, a transparent being appears in the desert… Weaving between all these visions, it is up to the visitor to forge his own.

News Editor - July 6, 2022 0
The founding members of the Marseille University Hospital Institute for Infectious Diseases (IHU Marseille Infection) had, in the midst of a conflict with Professor...