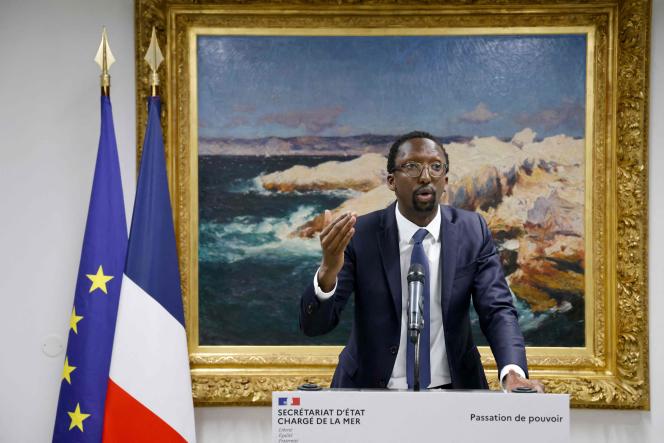 After the legislative elections which were fatal to the Secretary of State for the Sea, Justine Benin, the executive had to find a new incumbent. This is the Renaissance deputy (ex-La République en Marche) of Côtes-d’Armor, Hervé Berville, announced the Elysée in a press release, Monday, July 4.

Elected to the National Assembly for the first time in 2017, carried by the wave En Marche!, Mr. Berville was notably involved in development aid issues and was Emmanuel Macron’s “personal representative” in Kigali. in 2019 during the twenty-fifth commemoration of the genocide in Rwanda, his country of birth.

“I was born in a landlocked country, where the sea was more like a sweet dream (…). In 1994, when I arrived in the Côtes-d’Armor, following the genocide, the sea adopted me as much as it built me,” said MM. Berville during the handover with his predecessor Justine Benin. During this speech, he then displayed his priorities: first, “to defend the interests of our fishermen”, by acting “in the face of rising fuel prices”, leaving “no fisherman without a solution following the Brexit”.

It is also a question of “meeting the expectations of the French in environmental matters, by protecting the ocean, biodiversity, by fighting against climate change”, in particular by implementing “sustainable management of marine resources” and by attacking “the question of pollution”, in particular plastic in the oceans. Finally, he underlined that with the ecological transition, the other big challenge would be “that of the energy transition, in particular the development of renewable marine energies”.

In an orphanage in Kigali before the start of the genocide, he was evacuated with his brother in the first days of the massacres and adopted at the age of 4 by a family from Pluduno (Côtes-d’Armor). He only returned to Rwanda in 2015, where part of his Tutsi family was decimated during the conflict. In the meantime, Mr. Berville, 32 years old today, went through Sciences Po Lille, the London School of Economics, and carried out missions as an economist for the French Development Agency (AFD) in Mozambique.

During the last legislature, he sat on the Foreign Affairs Committee, before becoming spokesperson for the La République en Marche group in the Assembly. Mr. Berville also sent a report in 2018 to Prime Minister Edouard Philippe on the modernization of development aid. Last year, he was the rapporteur for a bill to reform French development aid, with resources reinforced and refocused on eighteen African countries and Haiti.

Another front for Mr. Berville: the fight against racism, from which he had not suffered until then. Along with other black elected officials, he was the target of death threats in early 2019, their author lamenting that he “unfortunately escaped the machetes of Rwanda”. During the last legislative elections, Mr. Berville was re-elected in the second round with 55.83% of the vote against the environmental candidate of Nupes, Bruno Ricard, in the 2nd constituency of Côtes-d’Armor.