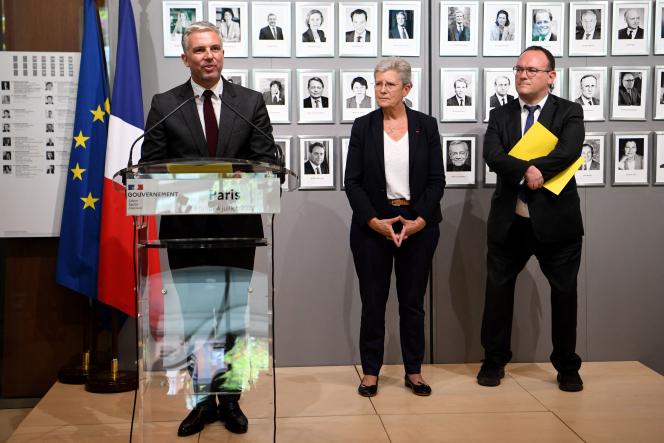 He takes on ministerial duties for the first time. Jean-Christophe Combe, Director General of the Red Cross, was appointed Minister for Solidarity, Autonomy and People with Disabilities in the second Borne government on Monday July 4. He takes over from Damien Abad, targeted by a preliminary investigation for attempted rape and ousted from the government after several weeks of controversy.

Mr. Combe will form a pair with Geneviève Darrieussecq, member of the MoDem and former Minister of Veterans Affairs during the first five-year term, who is appointed Minister Delegate for People with Disabilities.

“I measure the magnitude of the task, he said during the handover, Monday at midday. We are here at the ministry of vulnerabilities, I believe for my part that these vulnerabilities are an opportunity for our society. »

“Nothing can be done without relying on the people concerned”, he said, as a promise of listening and dialogue with all the players in the sector, after listing the “challenges to be met”:

Better reconcile family and professional life, support single parents, fight against child poverty, enable the elderly to age better and stay in their homes as long as possible.

No stranger to politics

With the academic Pap Ndiaye in national education and the emergency doctor François Braun in health, Jean-Christophe Combe, 40, is the third major figure of civil society within the Borne government. He is, however, no stranger to politics. He began his career as a technical adviser to the centrist Union group of the Senate. After a brief stint with the audit firm Deloitte, he also worked for several years with elected UMP then Les Républicains (LR). A graduate of Sciences Po Paris, he was director of the cabinet of Bruno Bourg-Broc between 2007 and 2009, when the latter was deputy of Marne and mayor of Châlons-en-Champagne.

From 2009 to 2011, he was chief of staff to Emmanuel Lamy, LR mayor of Saint-Germain-en-Laye, before joining the cabinet of the president of the French Red Cross, Jean-François Mattéi, in 2011. There held several positions, including the direction of commitment and associative life, before becoming the general manager, in 2017, of this humanitarian juggernaut which has more than 62,000 volunteers and 17,000 employees.

“I have always been interested in public and political affairs,” he told Le Figaro the year of his appointment. The 40-year-old says he is interested in history and politics. In 2021, he published an essay, Humanity is Not Negotiable, with a foreword by Nobel Peace Prize winner Muhammad Yunus. Written in the light of his experience in managing the Covid crisis, Jean-Christophe Combe pleads for “a society of social ties”, “a society of proximity”, “a society of care”, “a prepared society” , “a society of the human”.