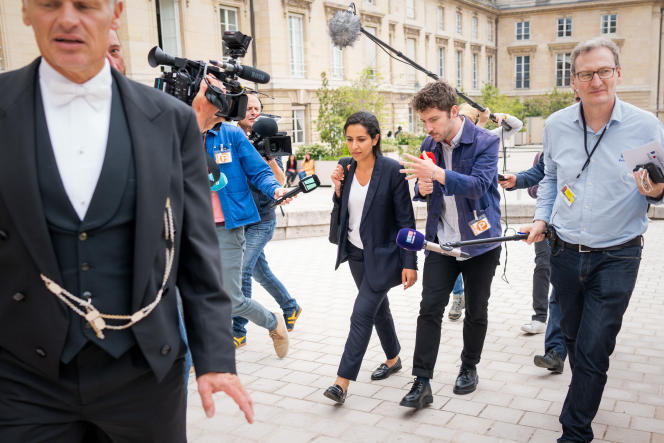 Sarah El Haïry returns to familiar territory. The 33-year-old MP was appointed Secretary of State for Youth on Monday July 4, a position she already held from July 2020 to last May alongside Jean-Michel Blanquer. Its portfolio now also includes universal national service (SNU) and is attached to both the Ministry of National Education and the Ministry of the Armed Forces.

A member of the Democratic Movement since 2014 after a first commitment to the Union for a Popular Movement (UMP), Sarah El Haïry has been the spokesperson for François Bayrou’s party since 2018. Re-elected in June for a second term as MP for the 5th constituency of Loire-Atlantique, facing a candidate presented by La France insoumise, she was also elected in opposition to the Nantes city council.

In the government, she was notably responsible for the development of the SNU, a device that is still experimental but which could eventually become mandatory. “Very happy to have the youth back in government! Be with all young people, everywhere in our territories. With the ambition to generalize the SNU! tweeted the new secretary of state after her appointment.

Defense of a so-called “combat” secularism

She embodies, like Marlène Schiappa – also reinstated in the government – ​​a line on secularism close to that of the Republican Spring, a trend whose place had been reduced in the first Borne government with the ousting of Jean-Michel Blanquer and the appointment of Pap Ndiaye, who does not share this conception of secularism.

As Secretary of State to the former Minister of Education Jean-Michel Blanquer, Ms. El Haïry had frequently joined his positions against “wokism” and defended a so-called “combat” secularism.

In October 2020, the weekly La Vie reported on its stormy exchanges with 130 young people gathered in Poitiers, at the initiative of social centers, to talk about “religion in society”. According to La Vie, Ms El Haïry had curtly reframed young people who felt they could not freely talk about their religious faith. The episode turned into a controversy when the government ordered an administrative investigation into the Federation of Social Centers of France, organizer of the meeting.