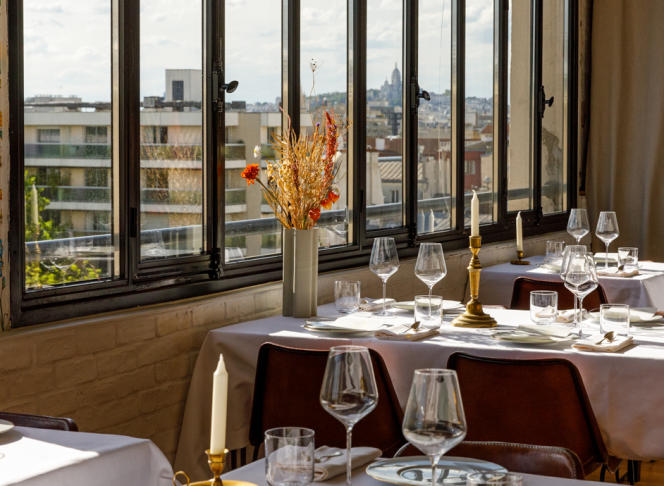 There are times when prejudices are stronger. Especially when they are positive, as in the case of Manon Fleury, who ticks all the boxes of the good student. Former high-level fencer, member of the Bondir.e network, against violence in the kitchen, she studied with William Ledeuil, Alexandre Couillon, Pascal Barbot and Dan Barber, before taking off at Mermoz, where she will cook during two years too short. Maybe that’s her only flaw: so far, she hasn’t been able to settle down for long. This is still the case at Perchoir Ménilmontant, where she resides for a few summer weeks.

However, she took over the place as if she were at home, had a large floral fresco painted on the walls by Alexandre Poulaillon, ordered her vegetables from her favorite producers (Les Limons de Toulotte and Erwan Humbert) and surrounded herself with a young team, knowledgeable and caring.

Paradoxically, it is with a form of relief that the first entry in the menu called “Free Fields” disappoints. An acid and textureless asparagus mousse under which hides an overly resistant kasha. It’s not that we like to see the best of the class stumble, but, finally, error makes them human. The asparagus broth, a little too salty, does not save the day. However, everything leaves a lingering freshness on the palate, which is still pleasant as the temperature rises at the start of summer.

After this half-miss, the success is total. Camelina seeds nestled in crunchy pickled onion petals remain memorable thanks to a captivating oil of geranium and the very special texture of pearl barley. The creamy rice and small spelled worked like a congee (a kind of traditional Chinese porridge) provides exotic accents thanks to the association of broad beans and fig tree oil. But far ahead, in the series of unforgettable dishes, prances monkfish matured in dried kombu leaves.

The algae pumped water out of the fish, swelling their moisture cells and firming up their flesh. The delicacy of this stratagem leaves a feeling of firmness. It is enhanced by zucchini, served in several forms: a flower crowns a piece of steamed cucurbit, an al dente and grilled section, finally, raw and bare slices like stained glass veil a praline of pumpkin seeds. A parsley oil greens the table with its herbaceous spiciness.

This elegance is reflected in the desserts, executed that evening by the cook and photographer, Aurore Bonami. On the white plate, a heart of sweet clover cream (an herb with a vanilla flavor) smiles under the first cherries of the season reduced to juice, as if they had been cooked in the sun. A sweet feeling of abandonment. Until the crackle of a budding almond. Poetry is here, distrusting all prejudices.

The detail that is not one The flowers placed on the tables are edible and seasonal, like the dishes. They are arranged by Variations Botaniques.

The seven-step menu bill for €95. Count an additional €45 for the wine pairing.