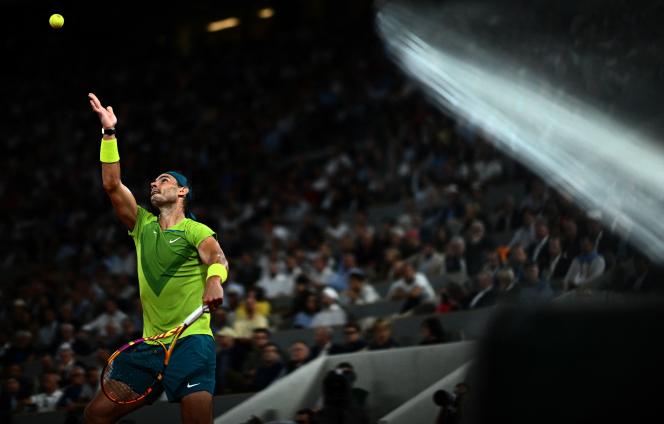 Some saw in it an ultimate sign of Providence. He would obviously have preferred to win this 14th final fairly. Friday June 3, the day of his 36th birthday, Rafael Nadal went for an 111th victory at Roland-Garros, taking advantage of the abandonment of Alexander Zverev in the semi-finals (7-6, 6-6). As we headed for a second decisive game after 3:12 of a duel as hung as illegible, the German’s right ankle twisted violently. In tears, the world number 3 left the Philippe-Chatrier court in a wheelchair. In a gesture that honored him, he returned a few minutes later on crutches to shake hands with the referee, to the Central’s ovation.

On Sunday, facing the Norwegian Casper Ruud as a surprise guest, the Spaniard will try to lift his 22nd Grand Slam trophy, his 14th on Parisian clay, seventeen years after the first. Since 2005, he has only missed the opportunity to blow out his candles there three times. Rafael Nadal in the final of the “most important tournament of his career”? A routine. Or almost. Three weeks ago, the castellan of the Porte d’Auteuil feared that he would not be able to defend his citadel. On May 12, the Spaniard limps like a cacochymic old man during his round of 16 in Rome against the Canadian Denis Shapovalov, lost in three sets (1-6, 7-5, 6-2).

His left foot, bruised by Müller-Weiss syndrome, a necrosis of the navicular bone, seems to indicate the way to retirement. The player has been dragging this incurable disease since 2004. That year, he had prevented him from treading the crushed brick in Paris for the first time. As resilient as he is, his body has limits that it has already largely exceeded.

At Foro Italico, Nadal, staring blankly, has these alarming words: “I play to be happy, but the pain takes away your happiness, not just to play tennis but also to live. There are too many days when I have to live with too much pain. There will come a day when my head will tell me basta. Three weeks later, he is reborn. As if the Parisian soil healed him, regenerated him.

After his demonstration against Novak Djokovic in the quarter-finals on Tuesday (6-2, 4-6, 6-2, 7-6), during a May evening that ended in the early hours of June, Rafael Nadal suddenly resumed his favorite costume. The Serb, who knocked him down right here in the semi-finals last year as his foot pain kicked in, received an entry uppercut. Way of saying: “No one beats Nadal twice in a row on the Philippe-Chatrier court. »

On Mallorca’s favorite playground, even a player as clinical as the world number 1 cannot withstand the violence of his forehand slaps over time. The left-hander thrashed the Serbian wall, attacking it again and again until it bent. It’s been a while since Rafael Nadal is no longer an ultimate defender, this bull galloping like hell behind every ball. Throughout this fortnight, he has given further proof of this: he has transformed himself into an extraordinary all-terrain attacker. No matter the rain, the storm, the cold or even the night, here more than elsewhere, the world number 5 is inhabited by an extra soul, a survival instinct that awakens the beast in him.

On Friday, before Alexander Zverev’s injury, Rafael Nadal looked suffocated in a damp, roof-closed Central. In a first set that he snatched after 1:30, he was down 6-2 in the tie-break. A “hold-up” as they say in the industry. Speak to him of “miracle”. The German made the game, the Spaniard suffered, winning – once will not hurt – most of his points at the net or behind drop shots. His lift did not jump, his uncrossed forehand did not come out of the racket. At the start of the second set, after an exchange of 44 blows, we saw him panting on his chair as rarely.

“I had not played for a long time in such heavy and slow conditions, I could not hurt him with my ball, to push him away, conceded Rafael Nadal, who will start favorite on Sunday. [Ending in the final] means a lot to me, even if there were a lot of sacrifices that I had to go through to keep playing. »

His personal doctor, who has been with him since the beginning of the fortnight, administers a treatment to him before each match. Which ? Sibylline, Rafael Nadal replied on Tuesday that we would have to wait a bit to find out: “We will talk about it after the tournament and you will understand. I’m going to give it my all here and then we’ll see. Now is not the time to give explanations. »

Invincible does not mean immortal. The Spaniard is fighting against time, dooming even the greatest to decline. Will this 2022 edition be its last? After painstakingly beating Canadian Félix Auger-Aliassime in five sets in the round of 16, he sparked the rumours: “To be honest, every game I play here may be my last at Roland-Garros, maybe even of my career, who knows? On Tuesday night, he continued in a similar vein, “I don’t know what can happen. As I said before, I will play this tournament, but after, I don’t know what will happen. I have what I have at my feet. If we can’t find an improvement, a small solution, it will become very difficult for me. »

Unanimous support from a versatile public

On Friday, the Philippe-Chatrier court was entirely committed to his cause, aware that, in the City of Light, Nadal is undoubtedly burning with his last fires. As soon as he entered the court, the Spaniard received a thunderous ovation from the 15,000 spectators, who did not fail to sing him a “happy birthday”. Forgotten, the whistles of 2009, when the Parisian public, tired of seeing him win after four years of unchallenged reign, was delighted to see him on the ground (defeat against the Swede Robin Söderling in the round of 16). The crowd is now feeling vague, suddenly nostalgic for a king who will soon abdicate.

This has been the case since the beginning of the fortnight. On Wednesday, around 1:30 a.m., you had to see the 15,000 lucky ones, standing, cheering endlessly their “Rafa”, at the end of his performance against Novak Djokovic. The Serb himself pointed it out, this crowd was “99.9% behind Nadal and carried him in the crucial moments”. In eighteen appearances at the Porte d’Auteuil, the Majorcan has rarely received such unanimous support. A way to properly celebrate what could be likened to a capital twilight.

News Editor - June 7, 2022 0
Some saw in it an ultimate sign of Providence. He would obviously have preferred to win this 14th final fairly. Friday June 3, the...

In Haute-Loire, a 4G antenna suspected of disturbing a herd of...