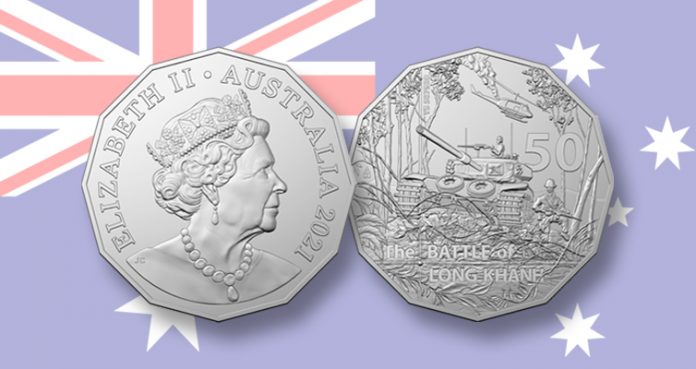 The 50th anniversary of Australia’s departure from Vietnam, some nine years later going into the battle, is the topic of a fresh 50-cent coin out of Australia.

From June 1971, Australia was involved from the Vietnam War for 2 decades. With no end in sight into an unpopular war, the Australians, such as the Americans, were diminishing their forces as they ready to pull out of Vietnam. But, withdrawal from Vietnam would require some time and might not be simple.

Mindful of enemy movement, the Australians launched Operation Overlord, directed at destroying enemy forces preventing them from interfering with the state’s security and the Australian withdrawal.

Following two weeks patrolling, Australian soldiers discovered what they believed was the primary enemy position, just across the border in South Vietnam’s Long Khanh Province. Critics of 5 Platoon B Company of the 3rd Battalion, Royal Australian Regiment started a morning attack prior to being pinned down by intense fire. Determined by the border of a concealed bunker complex, they called in artillery and air service. Three Australian soldiers died in the day’s battle, together with 10 wounded.

The opposite of this 2021 Uncirculated copper-nickel 50-cent coin comes with a lively battle scene, such as Australian soldiers in battle, a Centurion tank along with a busted Iroquois helicopter.

It’s packed in a capsule along with a vibrant presentation card and contains a mintage limit of 27,500 pieces.

The money retails for $10 Australian and can be issued just for collectors. To purchase, check out the Royal Australian Mint eshop, https://eshop.ramint.gov.au/.