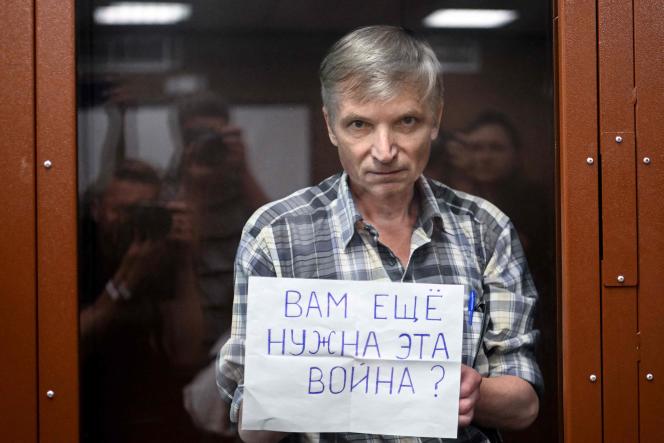 Moscow elected official Alexei Gorinov was sentenced to seven years in prison on Friday July 8 for denouncing the Russian assault on Ukraine, in the midst of a wave of repression to silence any criticism of the offensive decided by Vladimir Putin.

Judge Olessia Mendeleeva found the 60-year-old defendant guilty of “disseminating clearly false information” about the Russian military using “his official duties” and of having done so as part of a motivated organized group by “political hatred”.

Alexei Gorinov had, during a session of the city council in mid-March, called the conflict in Ukraine a “war”, not “a special military operation”, as official terminology dictates. Asking his colleagues for a minute of silence, the MP also mentioned the death of children in Ukraine, which, according to the judge, does not correspond to the information provided by the Russian Ministry of Defense in its daily press briefings.

Investigators also accused Mr. Gorinov of calling Russia a “fascist state” but the prosecution’s own experts concluded during the trial that those words were not uttered. The judge, on the other hand, insisted that the deputy’s opinion on the conflict had been formed “through group discussions”, which makes it possible to put forward a conspiracy.

“The recovery of the accused is impossible without a custodial sentence,” said the magistrate before sentencing him to seven years in a penal colony. This trained lawyer, elected independent deputy in 2017, will then be banned from holding public office for another four years.

Alexei Gorinov had come to this last audience, in his glass cage, brandishing a sign: “Do you still need this war?” “. The police positioned themselves to hide it.

On July 7, during his traditional “last words” at court, he notably said: “War is the fastest instrument of dehumanization of man. When the line between good and evil blurs, the result is always death. I will not accept it. He also challenged the judges:

“It is already the fifth month of war. We are promised victory and glory, but then why do so many of my fellow citizens feel shame and guilt? Boutcha, Irpine, Hostomel, do these names mean anything to you? »

Before his sentence was pronounced, the trial audience applauded the defendant, leading to the expulsion from the room of those who came to support him. When the verdict was announced, his wife, in tears, asked him not to answer any letters she wrote to him “so as not to waste too much time”.

Thousands of cases opened in Russia

Since February 24, when Russian forces entered Ukraine, authorities have passed a series of laws punishing up to 15 years in prison for those who publicly condemn the attack. Thousands of cases have already been opened alleging “spreading false information” or “discrediting” the armed forces. However, the vast majority of convictions are limited to fines. The verdict against Mr. Gorinov is the harshest to date.

In a lecture given on July 6 in Paris, the head of the human rights branch of the disbanded organization Memorial in Russia drew a parallel with the 1960s and 1970s in the Soviet Union: at the time, to avoid the Stalinist mass repressions, heavy sentences were given to a few individuals only, with value of example; other opponents or dissidents were only given administrative penalties, but with the permanent threat of a heavier sentence, via the opening of a criminal case, whether in the event of a repeat offense or simple political changes.

Mr. Gorinov is the first opponent, an elected official, to receive a prison sentence for his positions against Russian intervention in Ukraine, but other activists are currently awaiting trial in detention.

This verdict also comes in the context of preparations for municipal elections in Moscow in September. Incumbent MPs and moderate opposition figures, who were previously considered loyal, are removed through various legal procedures. Another municipal deputy, Elena Kotenochkina, is accused of the same facts, but she is not tried because she fled Russia, like many opposition activists because of the repression which has increased further in recent months.

Vladimir Kara-Mourza, one of the few opposition figures who remained in Russia, also faces a heavy prison sentence. Arrested in mid-April in Moscow and sentenced to fifteen days in prison for “disobeying the police”, he was prosecuted for “disseminating false information” about the Russian army, an offense punishable by fifteen years in prison. A well-known face of the opposition to Vladimir Putin, Ilia Yachine, 38, already sentenced to fifteen days in prison for the same reason, also fears heavier prosecutions.

Another example is that of Alexandra Skotchilenko, an artist from Saint Petersburg imprisoned since April and who is awaiting trial for sticking pacifist labels in a supermarket.

This week, the Parliament again adopted a series of texts providing for heavy prison sentences with very vague language to repress calls to act against its security or even “confidential” cooperation with foreigners.

Since February, Russia has also blocked many Russian and foreign media on its territory, as well as some of the biggest social networks, such as Twitter, Facebook and Instagram.