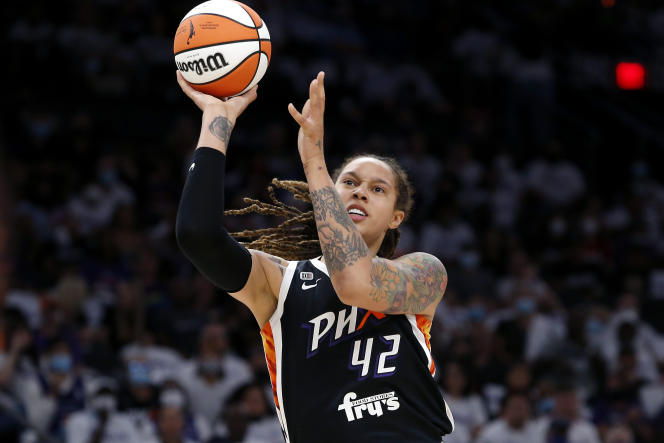 This is the first step in his journey before Russian justice. Brittney Griner, the American basketball player detained in Russia, pleaded guilty to smuggling drugs. “I wish to plead guilty to all charges. (…) But I did not intend to violate Russian law, “said the player in court in Khimki, a suburb of Moscow, Thursday, July 7.

This case is part of a context of tensions linked to the conflict in Ukraine, many observers suspecting Russia of using this case for a future exchange of prisoners with the United States. Before the start of the second trial hearing on Thursday, Russian diplomacy had denounced the “public hype” of American leaders around his case, believing that it was “parasitizing” the case. “What can help (…) is the consideration by the American side of signals it receives from Russia,” said Russian Deputy Foreign Minister Sergei Ryabkov.

On Wednesday, the White House assured that getting Brittney Griner released was a “priority” for the US president, who read a poignant letter from the sportswoman and spoke with his wife. Prior to this, the highest authorities in Washington had said that Russia was “unfairly” detaining the star.

The Phoenix Mercury player was arrested on February 17 on her arrival at Moscow’s Sheremetyevo airport in possession, according to the prosecution, of vaporizers and a cannabis-based liquid. “I was in a hurry while packing and the cartridges accidentally ended up in my bag,” the player said on Thursday.

Up to ten years in prison

Brittney Griner, who faces up to 10 years in prison, arrived Thursday at the hearing handcuffed and escorted by several officers, wearing a red T-shirt and sweatpants. Based on Russian case law in similar cases, the 31-year-old woman can expect a heavy sentence, to be served in a Russian penal colony. Detained in a Russian prison, the basketball player wrote a letter to Joe Biden symbolically deposited at the White House on Monday, the day of the Independence Day of the United States, imploring the president not to “forget it”.

While observers are already anticipating an upcoming prisoner swap between Griner and a Russian detained in the United States, Mr. Ryabkov asked to wait until the end of the trial. “It is clear that not all legal proceedings are over with us. Until that’s done, we can’t talk about the rest, “said the diplomat.

Elizabeth Rood, deputy chief of mission at the US Embassy in Moscow, said after the hearing that she spoke with the basketball player in the courtroom and passed her a letter from President Joe Biden.

Brittney Griner will be questioned by the court at the next hearing on July 14.

News Editor - July 10, 2022 0
The exercise serves to defuse controversy and prepare the ground. At the start of his upcoming trip to Saudi Arabia, US President Joe Biden...