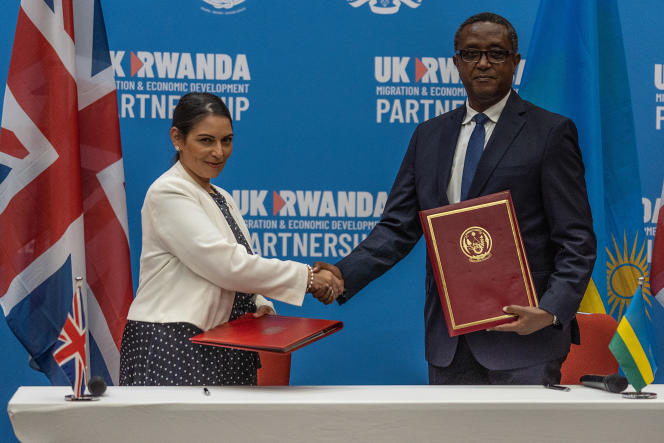 The first batch of asylum seekers sent to Rwanda from the UK under a controversial deal are likely to arrive in the East African country “in the coming weeks”, officials said Thursday (May 19). in Kigali.

The deal allowing Britain to send migrants and asylum seekers to Rwanda has drawn heavy criticism from human rights groups, opposition figures in both countries and even the United Nations . This agreement announced in April makes it possible to send asylum seekers who have arrived illegally on British soil to Rwanda, with London hoping to deter clandestine crossings of the Channel, which are on the rise.

Under this agreement, London will initially finance the device to the tune of 120 million pounds (some 140 million euros). The Rwandan government has clarified that it will offer the possibility “to settle permanently in Rwanda if they wish”.

“The UK has informed the first group of around fifty people that they will be relocated and we expect to hear from our UK partners soon” on their arrival date, “probably within the next few weeks”, said said Alain Mukuralinda, deputy spokesman for the Rwandan government in a statement released Thursday evening.

No “trading in humans”

For her part, government spokesperson Yolande Makolo confirmed that “migrants [were] likely to arrive in the coming weeks”. Proposals to relocate tens of thousands of people in the coming years, which are expected to be challenged in UK courts, have been called “inhumane” by rights groups.

Human rights activists accuse President Paul Kagame’s government of crushing dissent and keeping an iron grip on power, but while announcing the asylum deal on April 14, British Prime Minister Boris Johnson declared Rwanda to be “one of the safest countries in the world”.

Mr Kagame said in April that the deal with the UK is not “human trading”. “We don’t trade in human beings, please. This is not the case. In fact, we are helping,” he added, describing the agreement as an “innovation” promoted by Rwanda. Paul Kagame said Rwanda had been hosting refugees for “decades”, mostly from neighboring countries.

According to UN figures, Rwanda hosted more than 127,000 refugees in September 2021, almost half of them children. The majority were Congolese, followed by Burundians.

News Editor - May 20, 2022 0
Damon Albarn is undoubtedly the richest personality to have emerged from Britpop, a scene which dominated the mid-1990s by paradoxically flattering this Anglocentrism and...

Amélie Oudéa-Castéra, close to Macron at the Ministry of Sports and...