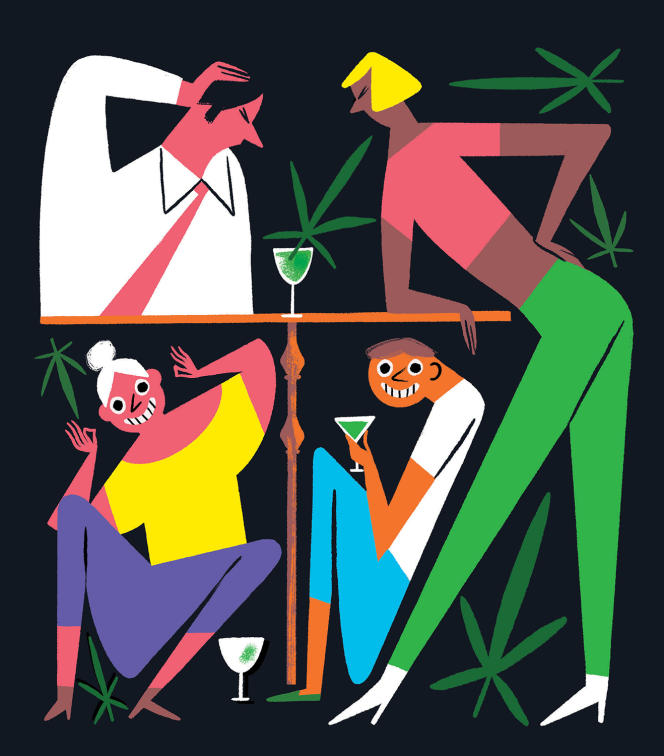 In the cupboard, classic cocktails, the aperitif tray has been welcoming a new molecule for two years: CBD. Sausages, beers, wines, sparkling waters are now available with cannabidiol. The range is just beginning, because the market is already proving exponential.

Since November 19, 2020, the date of the judgment of the Court of Justice of the European Union which clarifies the marketing of this cannabis molecule, around 2,500 CBD product shops have appeared throughout France, also both in cities and in the countryside. After the stressful periods of confinement due to Covid-19, letting go has entered the spirit of the times.

Let’s push the door of Republik Garden, a small grocery store of a new kind, dedicated to CBD in the République district, in the heart of Paris. Since its creation on December 11, 2020, it has been open every day of the week, including Sundays. The few customers who come mainly buy CBD for their vape, but also CBD oils. These are the flagship products of the store, according to Boris H., one of the five creators of the concept, all converted music professionals.

Beers, wines and other sweets

On the aperitif side, there are a few CBD beers, such as Turn or La Pénard, but also white, red, dry or sparkling wines, with CBD of course. On the sugar side: chocolate, candies, jams, honey, everything with CBD. “In a short time, we will find everything in CBD,” says Boris. It is a molecule that really relaxes and our customers who want to stop THC start using CBD. »

Translation for the common man who still knows how to relax with a simple walk in the forest: CBD, or cannabidiol, is a component of hemp, which is attributed with many therapeutic benefits, such as relieving stress and anxiety, but also the pain – the scientific community is however more reserved, pending large-scale clinical trials.

Recent advances have made it possible to extract this molecule from the plant by separating it from another, THC (tetrahydrocannabinol), which is psychotropic and can become addictive. “It’s a constantly growing market,” says Boris, who remains vague about the increase in sales in his shop, from 20% to 40%.

Among the CBD foods “that work well” for the aperitif, here is a UFO among others: the shape of the bottle, its luxurious packaging and its astronomical price (150 euros per bottle in store as on the site of the producer), we believe we are dealing with a champagne, but it is a sparkling wine from France, the rosé punch made by Rozoy

While the Parisian seller refers to this wine to his customers as a CBD rosé, Clément Rozoy, creator of this first luxury wine with natural cannabis aromas, explains that its formula is more complex than a simple CBD product. , easily imitated: “My wines have terpenes [aromatic molecules] which have organoleptic virtues in addition to therapeutic virtues. However, there are several thousand varieties of cannabis, each of which has its own olfactory signature. Blended with wine, they offer endless recipes,” explains the 36-year-old pioneer, who relies on pinot noir and chardonnay grapes to form the basis of his sparkling wines.

Sponsor of the Cannes Film Festival, it already manufactures 25,000 bottles, all manually labeled in Champagne, where they are made and estimates that it will be able to go up to 100,000 in the near future. “I work with a Champagne producer who wishes to remain discreet so as not to compromise his activity. In France, it is always complicated to work with cannabis, even if only the terpenes are used. My thing is aromas and how to marry them with quality wine in order to open up new fields in gastronomy,” explains Clément Rozoy, who has filed a world patent on his way of introducing terpenes into wine. “We must not distort the quality of the wine”, adds the one who is only at the beginning of this adventure.

The introduction of CBD seems the most delicate phase so that the result has that taste of “come back to it” sought. Fabrice Chauveau, butcher in Larçay, in Indre-et-Loire, faced this problem when making his sausage with CBD. “We had to dig into our recipe to remove the bitter side of the plant. So we’re just at 0.3% hemp per kilo. If you add more, the sausage is not good,” he explains. With his sidekick, Aurélien Bonnard, who was originally a client of his butcher’s shop, he created the Au Cochon Vert brand, which produces “sauchichon”, but also rillettes and country terrine.

The taste of his new CBD foods appeals, customers of his butcher shop have adopted them: “All ages, they find a nice interest in it, which surprised me at first. Older people buy it from me regularly. It is not necessarily the relaxing side that interests them, but the flavor of the plant that is used as an aromatic. There are those who recognize this taste that they experienced when they were young and those who did not know it at all and who like this novelty,” says the innovative butcher.

While CBD rather invades the world of sweet dishes, it offers an exciting opening into the world of salty. Launched in March 2022, the sauchichon is experiencing an exponential growth curve. For the moment, it is made in his butcher’s shop, La Tourangelle, but there is already a shortage of space to meet demand. “Sixty retailers are waiting for us to make more,” admits Fabrice Chauveau, who currently produces 400 sausages per month.

The success was immediate: since its creation two years ago, production has approached two million cans. At the head of the pack, there is also Naka, a French drink also born after confinement, at the end of 2020, and which is spreading in all specialized points of sale. Soon others will emerge, like Baga, with flavors such as white peach and verbena or lemon balm-raspberry that two young men from the South West are developing and that we should be able to taste this summer. The aperitif tray has not finished renewing itself.