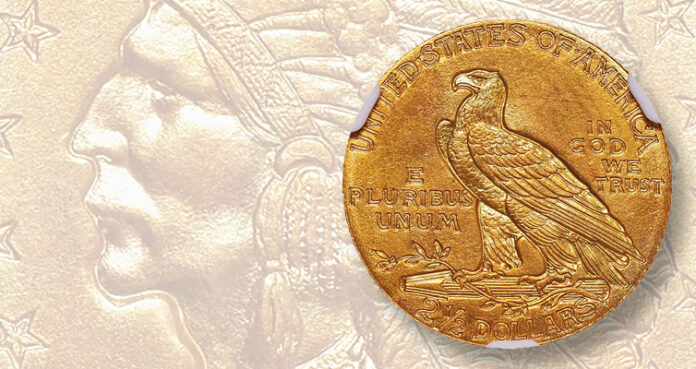 Scotsman’s Nov. 5, Collectors’ Auction features some amazing examples of Bela Lyon Pratt’s Indian Head Gold $2.50 and $5 Coins. These coins are distinguished by their sunken designs that were first struck in 1908.

Between 1908 and 1915, the U.S. Mint tried several Proof finishes on its Indian Head $2.50 and $5 Coins. According to the cataloger, “The finish [on this 1910 coin] differs minimally than that of a circulatory strike which helps explain why they proved unpopular among contemporary collectors who had difficulty distinguishing genuine proofs from well struck commercial pieces.” There was a mintage of 682, and PCGS estimates that only 136 of these coins still exist today.

The catalog also states that “Medium gold, copper-orange and bright moonbeam-gold flashes across headdresses accent the obverse.” The reverse is adorned with deeper hues of citrus-gold, which are tempered by occasional steely moonbeam accents.

Set waiting to be completed

Collectors who want to get a head start on collecting Indian Headquarter eagles will appreciate a 12-piece set in a Capital Plastics holder. It is missing three dates: the 1909 and 1914 common coins as well as the 1911-D issue.

Scotsman writes that the set is well-matched. He says, “Golden-orange surface with ample luster fills the collection with almost identical examples that grade within a narrow window of Extra Fine through Almost Uncirculated,” pointing out that these “give a new collector the chance to give this run his finishing touch.”

The half eagle series contains a few more difficult dates than the quarter eagles with Indian Head circulation strikes. The 1909-O Indian Head $5 Half Eagle enjoys the status of the only New Orleans Mint Coin in the series, with a low mintage at 34,200.

Scotsman will present one of the Blackhawk Collection pieces graded About Uncirculated (58) by NGC. Scotsman noted, “A quite crisp example in termsof strike, this seems to be a remarkable original piece as well. There are few representatives from New Orleans Mint that are more beautiful.”

A 1908-S Indian Head Half Eagle graded MS65 by Professional Coin Grading Service is another highlight. It has a striking strike and wonderful luster. According to the auction house, “The cataloger can’t recall any better example of any date as this piece received incredible sharpness from both dies from the middle to the end of each feather in its headdress.”

David Akers, 1988, wrote that there were more gems from this issue than any other branch mint Indian Head halves eagle, and that there are also some exceptional, almost perfect specimens.