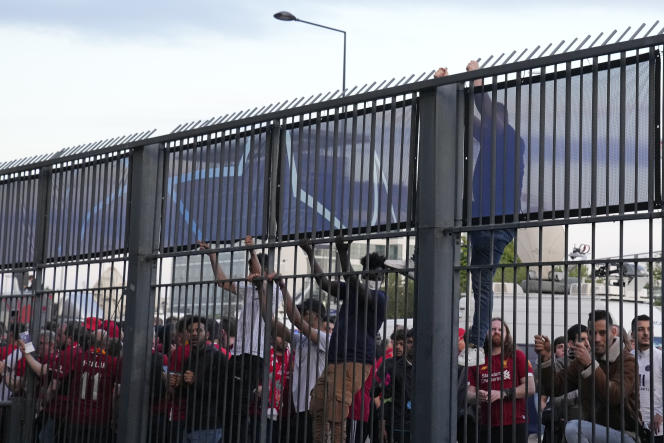 A sad sight. Real Madrid’s victory in the Champions League final against Liverpool (1-0) was overshadowed by chaotic scenes near the Stade de France (Saint-Denis, Seine-Saint-Denis) where Saturday, May 28, the final of the major European football competition.

Spectators blocked at the entrance to the stadium, tear gas, and attempts to break in by climbing barriers… In the European press, journalists have largely returned to the incidents that occurred around the Stade de France. Starting with the British media. More than on the defeat of Liverpool (1-0), the newspapers logically insisted on the serious failures noted on the sidelines of the meeting due to the difficulties of access to the enclosure of Saint-Denis, which delayed the coup d sending off the match for more than half an hour and caused tensions away from home.

The tabloid The Sun is the most virulent with a title in French (“Stade de Farce”) and the testimony of Marvin Matip, the brother of Liverpool club defender Joël Matip, who said he had to take refuge in a restaurant with his pregnant wife to escape the tear gas sprayed in their direction.

The Telegraph, for its part, publishes the damning account of Jason Burt, the head of the newspaper’s football section. “I was in front of Gate Y when I was caught in the tear gas used indiscriminately by the French riot police at the Stade de France,” he recounted in an article. And to add: “I was talking to supporters who had been waiting quietly, some for three hours, when they reached my face, pricking my eyes, my lips and my tongue. I saw that they were dispersed. I could not believe it (…) it was absolutely shameful. »

Highlighting the “bottlenecks” that Reds fans were directed to despite arriving two and a half hours before kick-off and the “unbearably slow” checks, Burt said: “It’s a shame UEFA have accused the supporters of arriving late. It is simply wrong. They tried to launch their version. Now they have to apologize. »

On the Spanish side, the main focus is on Real Madrid’s fourteenth continental title. The sports daily Marca has renamed this coronation the “Decimocurtua”, a pun between the name of the impassable Belgian goalkeeper Thibaut Courtois and the number fourteen. “With nine saves, Courtois was the undisputed hero of the final,” Spain’s best-selling newspaper said on its front page on Sunday.

But the incidents of the evening also hold a large place in the Iberian newspapers. Alfredo Relano, honorary president of sports daily As and a respected voice in Spanish football, comes down hard in an editorial, denouncing Liverpool and “their hordes of ticketless barbarians” who “created an untold scandal at the gates of the stadium, which could well have caused a disaster, even if everything [was] fortunately back in order with the delay of the kick-off”. Facts that “cannot go unpunished”, he added. “A shame: the final started half an hour late because of the chaos at the stadium entrances,” the Catalan daily Sport posted on its front page on Sunday.

The German media are also wondering about the organizational flaws of the Union of European Football Associations (UEFA). “The evening of chaos,” wrote Bild, who, in sporting terms, was “Klopp’s bitterest defeat,” the German coach of Liverpool.

The Corriere dello Sport returns like all the Italian press to the “flop of the organization” in Paris. “A bad evening at the end of a sad season for France, where security and public order problems have multiplied in the stadiums”, writes the Roman newspaper.