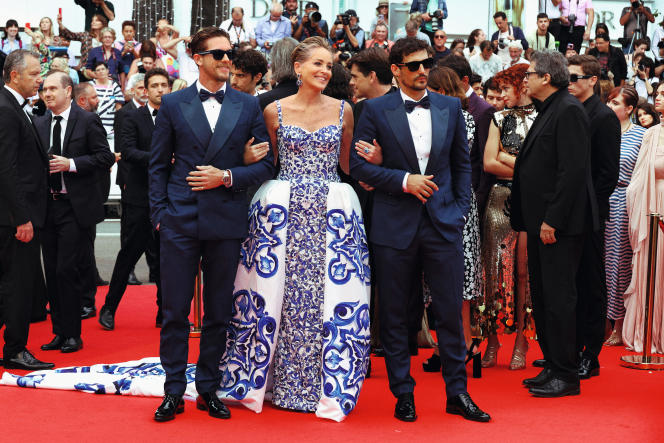 Did she come to see a movie or show off her dress? Is she there to honor the cinema or an advertising contract? Sunday May 22, at the time of the screening of Almond Trees by Valeria Bruni Tedeschi, Sharon Stone showed up at the bottom of the steps of the Palais des Festivals accompanied by two beauties, their eyes covered by sunglasses. One is called Sam, the other Adam, both are models and, as life is well done, they are also the partners of the said Sharon Stone in the context of a major advertising campaign currently being carried out by the Dolce brand

Since this happening in Cannes mixing fashion and cinema was mainly intended to make people talk about Sharon Stone’s dress, let’s talk about it a little more. In addition to its train, it shone indeed by the beauty of its patterns. Concretely, these blue patterns are majolica, the patterns historically used to decorate Italian Renaissance earthenware, whose technique had been borrowed by the Italians from Spanish and Arab potters from Majorca.

Alongside Sharon Stone, Sam and Adam were also obviously dressed by the brand. In this case, they sported two blue tuxedos, allowing us to make a small point on the male evening outfits. Along with black and ivory, blue is one of only three colors that a man can historically wear in such circumstances. The idea is indeed that in the evening, men give women the monopoly of the most shimmering colors, so that they are the undeniable center of attention.

Finally, it should be noted that on his wrist, Sam (unless it was Adam) was wearing a sports watch that evening, more precisely a Rolex Submariner, a “gold and steel” model, called Rolesor. From a horological point of view, it is an eminently respectable choice. From the point of view of conventions, on the other hand, there is something to complain about. It is normally advisable never to wear a watch with a tuxedo because, within the framework of these great occasions, time is supposed to stop and the time becomes a derisory piece of information… At the same time, can we consider a marketing operation as a big occasion? We ask the question.