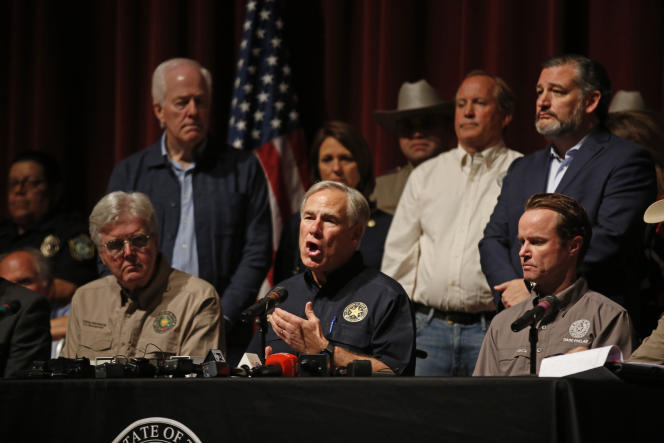 The teenager who killed at least 19 children at a Texas elementary school on Tuesday announced on Facebook that he was going to attack an elementary school, state Governor Greg Abbott said Wednesday (May 25th) during a a press conference.

The young man identified as Salvador Ramos, 18, wrote three posts on the social network to announce that he intended to carry out a shooting against an elementary school. He then posted a message stating that he was going to shoot his grandmother, then another message confirming that he had indeed shot her, added Greg Abbott. Hit in the face, she survived and called the police.

“The third message, probably less than 15 minutes before arriving at school, read: I am going to open fire in an elementary school,” Abbott said, adding that Salvador Ramos had no a priori criminal record or proven mental health issues. These messages are the only warnings issued before the shooting, the governor continued.

A spokesperson for Meta, the company that owns Facebook, clarified that these messages were privately sent to another user: “We are cooperating closely with law enforcement in their ongoing investigation.”

Governor Abbott’s press conference was disrupted by Democrat Beto O’Rourke. “You say it wasn’t predictable, it was completely predictable from the time you decided not to do anything,” the Democratic gubernatorial candidate blasted incumbent Mr. Abbott.

“You don’t do anything, you don’t offer us anything,” O’Rourke said. “You are responsible,” he assured. He was met with a volley of insults and that he “exceeded the limits” by the mayor of Uvalde, present in the room. In 2019, during a debate in the Democratic Party primary, Beto O’Rourke said, “Damn, yeah, we’re gonna take your AR-15, your AK-47.”

Weapons bought for the birthday

Hosted by his grandparents, the shooter fled the family home in his vehicle to go to Robb Elementary School in Uvalde. He was the victim of an accident for an undetermined reason near the school. The accident caught the attention of several employees of a funeral home, but he fired in their direction when they approached, according to the Washington Post. Alerted to a traffic accident, a police officer exchanged shots with him, without being able to prevent him from entering the school.

When he entered the facility, he was armed with an assault rifle of the two semi-automatic AR-15 type rifles he purchased just after celebrating his 18th birthday on May 16. It was 11:30 a.m. local time when he barricaded himself in a classroom and began shooting at the students, aged 9 to 10, and the two teachers present, said Lt. Chris Olivarez, spokesman for the Department of Texas Public Safety.

It took more than 30 minutes before he was finally shot by border police officers.

News Editor - May 25, 2022 0
The number of confirmed cases of monkeypox worldwide has reached 219 outside countries where the disease is endemic, according to a report released on...