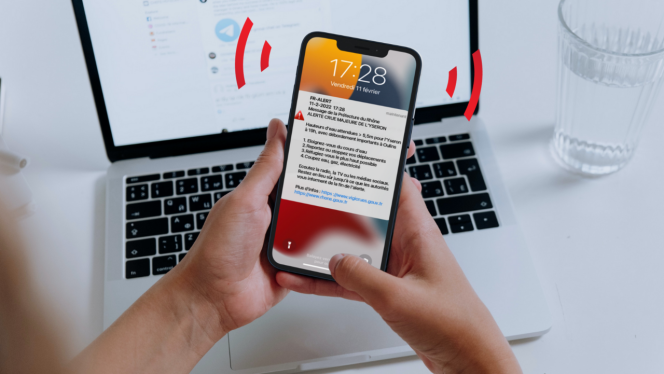 In the event of a flood, attack or epidemic, our mobiles will now be able to display a security alert issued by FR-Alert, a public system officially operational since Monday, June 21. This is the second time that the state has attempted to build such a system for mobiles: the previous one was quickly abandoned, in particular because it required downloading the SAIP application, which few French people had installed.

The new device does not require any action from mobile owners: the messages automatically arrive on the screen of their phone. Except that a good quarter of mobiles in circulation will not receive them.

The mobile will emit a distinct ring tone, even in silent mode. This will only be interrupted when the message is consulted. Its text may be spread over several paragraphs, specifying the nature of the risk, the contours of the geographical area affected, as well as the action to be taken to protect oneself from danger.

On Android mobiles, care must be taken to memorize the content of the alert, because once it is closed, the message, deeply buried in the mobile settings, will become difficult to find. On the iPhone, on the other hand, it can be found in the notifications.

A multitude of risks will be likely to be the subject of an alert, starting with natural events such as floods, storms, tsunamis or forest fires. This is followed by biological and chemical risks (pollution, gas leak, nuclear incident) and technological and industrial risks (serious accidents on road, rail or air networks, industrial incident). As well, of course, as serious public security events, such as attacks.

Finally come the health risks: epidemic, pandemic, agri-food incident. “In 2020, for example, we could have imagined a national alert signaling the first confinement”, imagines Yves Hocdé, deputy director in charge of FR-Alert for civil security. Conversely, for risks affecting small areas of the territory, the alert will be targeted, sent only to mobiles located around the area concerned.

The technology chosen by the state, called cell broadcast, will leave out at least a quarter of the devices in circulation. Ordinary mobile phones are excluded: one in ten French people is equipped with one of these old-fashioned models, which are more popular among seniors.

Even among smartphones, some older generation models cannot receive alerts. Apple’s ranges are only compatible with models marketed after September 2015, the release date of the iPhone 6S, on the express condition that their iOS software is up to date. On the Android mobile side, the overwhelming majority of models released since 2021 can receive alerts, but models dating from before 2018 are rarely compatible. According to Romain Moutard, the Lt. Col. of the fire department who led the program, “time will do its work” as these aging models slowly fade away.

In order to be able to alert incompatible mobiles, the State is studying an alternative solution, the competing technology of geolocated SMS (location-based SMS), which allows you to send a simple text message. But these messages tend to saturate the networks and take several hours to pass, compared to a few minutes for those sent by cell broadcast. They often arrive too late. With the help of operators, the State is studying the possibility of reducing the number of SMS sent to speed up their delivery, by targeting only old-generation mobiles, those which cannot receive alerts by cell broadcast.

Either way, location-based SMS technology will be adopted by the end of the year for another, complementary use: sending informational text messages a posteriori, written in the past tense: “You were in this area at such an hour, here is what to do. »

Unfortunately not because you have to be connected to 4G to receive them. The fourth generation mobile telephone network covers 91% to 93% of the territory depending on the operators. In France, the 3G networks, whose coverage is slightly better, are not capable of conveying these messages. “It would have required costly interventions on thousands of sites”, justifies Romain Moutard.

Initially, alerts will rarely switch to 5G, as operators have barely started work on the cell broadcast system on this network. 5G currently has three million subscribers in France.

How accurate will the alerts be? The minimum area covered will be that which an antenna is capable of covering, varying from a radius of five kilometers in the countryside to a few hundred meters in the heart of cities. It will therefore be impossible to alert mobiles located exclusively in a street.

The question arises because the previous alert system, based on the SAIP application, experienced many malfunctions. Rather than resorting to a new technology, as was the case with SAIP, the State chose a proven technology, cell broadcasting, which has been used in several countries for more than ten years. “I haven’t heard of any crashes with this technology,” says Romain Moutard. In addition, where the SAIP application only reached 900,000 users, cell broadcasting is capable of alerting tens of millions of mobiles.

However, the deployment of the French version of the cell broadcast followed a tight schedule: “We are happy to have managed to land in just twenty months”, concedes Romain Moutard. In mid-June, the operators were still updating their networks, which does not entirely reassure FR-Alert’s robustness during the first months of operation.

Also, in the past, cell broadcast technology has been able to broadcast false alerts. In Hawaii, for example, in 2018, a routine test led by mistake to the mass sending of a nuclear alert, causing scenes of panic. To avoid this scenario, “the test messages have been written with a specific graphic charter, they clearly mention that it is an exercise”, explains Yves Hocdé.

This is a key question, because the problems of the SAIP application do not explain all the malfunctions of recent years, and the State also has a share of the responsibility. Several alerts were not issued following “operational malfunctions”, acknowledged by the Ministry of the Interior, and others were issued too long after the incident.

Even if it is impossible to win in 100% of the cases the race against time which constitutes the launching of an alert, the emergency services have set themselves the objective of doing better. According to Yves Hocdé, past crises have been the subject of feedback. In order to expedite the issuance of alerts, “fifty standard messages have been drafted. All that remains is to adapt them according to events”.

The prefectures – authorities that will issue the most alerts – have started to prepare. “The human chain deserves to be strengthened, with training, annual simulations, designed according to the specific dangers of each department. We must also improve the interoperability of the information systems of the various emergency services and authorities. This work has been undertaken to bring all the territories up to standard by 2026. Priority is given to the departments where the issues are the most sensitive, in particular in anticipation of the Olympic Games. »

Educating the general public is also important. “Each citizen must receive at least two to three messages per year: repetition determines the function”, judges Romain Moutard. His colleague Yves Hocdé also believes that it is “essential to develop the right reflexes in the event of a major event”. When will these educational alerts be issued? The matter is still in arbitration.