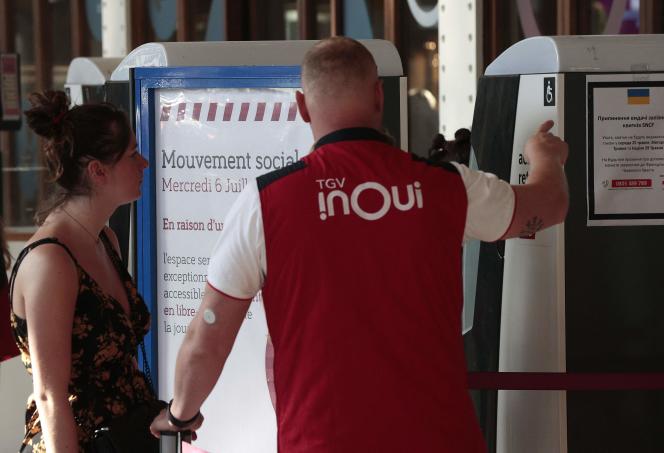 The management of the SNCF granted, Wednesday, July 6, a first increase to its employees, who mobilized in number to follow the strike which disrupted departures on vacation. At the end of a round table with management, the National Union of Autonomous Trade Unions (UNSA), the company’s second largest union, welcomed the “encouraging measures”, which will have to be reviewed at the end of the year at the end of the year. gauge of inflation, reported to Agence France-Presse its secretary general, Didier Mathis.

The management of the SNCF will in particular put in place a general increase in salaries of 1.4%, accompanied by a bonus of 400 euros for all agents and an increase of 100 euros on a holiday gratuity. In total, the increase will be 3.7% for low salaries and 2.2% for managers, for a median of 3.1%. “The account is not there”, protested for its part the SUD-Rail federation, which assures in a press release that it “will not resign itself to validating yet another decline in the purchasing power of the employees of the SNCF”.

Third union in the group, SUD called for a “long-term response” and demanded “full compensation for inflation and fair compensation for the efforts made on a daily basis, particularly in this period of strong recovery in traffic”.

As rail prepares for a summer of record attendance after two years marked by the Covid-19 epidemic, the four representative unions of SNCF – CGT, UNSA, SUD-Rail and CFDT – had called for a strike. Wednesday to demand wage increases in the face of runaway inflation.

All customers whose journeys have been canceled have normally been notified by text or email. In the event of a canceled train, “you don’t have to get a refund and buy another ticket, which will be at today’s price and therefore more expensive, but you have to make an exchange: the ticket will be at the same price as the one you you had paid initially, without additional cost, “said the SNCF.

In Nantes, out of 507 interregional trains which were to circulate, only 141 are maintained, according to the CGT-Cheminots. On the forecourt of the station, around forty trade unionists from the CGT and SUD-Rail unfurled their flags. “Our salaries have been frozen since 2014 and we are asking to bring forward the annual negotiations on our salaries, which are only scheduled for 2023,” said Nicolas Boumier, secretary of CGT-Cheminots in Nantes.