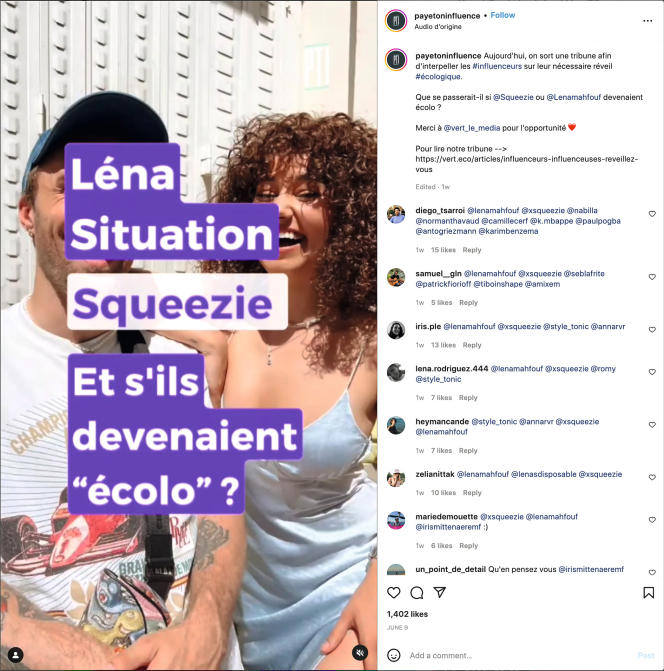 “What would happen if Lena Situations or Squeezie went green?” If these two Instagrammers, who together have 11 million subscribers, promoted train travel rather than plane trips to New York and the joys of happy sobriety rather than fast fashion brands? This is the question posed by the Paye ton influence collective in a column published on June 9 on the Vert site.

Created in December, his Instagram account calls on the world of influence to change its “climaticide practices”. Contest to win a three-night trip to Tahiti, another to win vouchers for 1,000 euros for shoes or even a weekend at the Coachella Festival sponsored by Heineken… Under each of these posts, Pay your influence comments on the consequences of these practice. In May, the collective asked in a story to the lingerie brand Etam if it was “still normal in 2022 to order a private jet to move your influencers? »

Behind this initiative, Amélie Deloche, 27, and Carla Monzali, 24. The two young women met as part of the Student Manifesto for an ecological awakening, launched in 2018. Signed by more than 30,000 students, this text, which called for the ecological transition of higher education, gave birth to a collective. Amélie and Carla, then students in business school, are involved as volunteers.

“Very quickly, we realized that we only spoke to people who were already convinced. As consumers of social networks, subscribers to big influencers, we said to ourselves that we also had to ask them to change this model which promotes a consumerism incompatible with the climate emergency, ”explains Amélie Deloche.

While a French person spends an average of two hours and twenty minutes a day on social media, 70% of the population say they want to receive information about a product through influencers and not from advertising (We Are Social and Hootsuite), the prescriptive power of Instagram stars exceeds that of traditional media. In this context, “if Léna Situations stopped flying, it would certainly have more impact than a message from the government”, imagines Amélie Deloche.

We are not quite there. While Paye ton influence hoped to achieve the same success as the Balancetonagency account, which denounces harassment practices in the advertising world, its actions are still not very visible. His arrests are drowned out by the ocean of comments and heart emojis that influencers receive. “Sometimes we are blocked, and more often than not, we are seen as killjoys”, regrets Amélie Deloche.

On the influencer side, few wish to speak out on the issue. Neither Shauna Events, the number one influencer agency in France, nor Léna Situations responded to our requests. Followed by 230,000 subscribers, Marie Moyenin confided that she was not “comfortable with the subject”. And for good reason, these criticisms call into question the raison d’être of the profession. “The community expects travel influencers to travel to distant destinations, where they will take dreamy photos,” says Guillaume Doki-Thonon, co-founder of influencer marketing agency Reech.

Similarly, contests are one of the most effective levers for attracting customers. Changing its practices, for the 150,000 French influencers, risks causing them to lose profitable partnerships, or even subscribers. “Some of the fans, recruited through commercial content, are still very formatted by the consumer society and may not find themselves in a more committed line”, analyzes Didier Courbet, professor at Aix-Marseille University.

“Succeed without burning the planet”

Things are moving anyway. In May, another group of female students, from Paris-Dauphine University, posted an open letter on Twitter asking influencers to stop promoting “ultra-abundant lifestyles and consumption.” Originally, Estelle Hensgen, 21, shocked by a contest in which Seb la frite, influencer with 3 million subscribers on Instagram, offered the equivalent of 2,000 euros in sneakers.

In January, a tweet from Thomas Wagner, founder of the climate crisis news site Bonpote, caused a video of a McDonald’s delivery by private jet to be taken down by the FastGoodCuisine account. “We don’t want to hit them but show that we can succeed without burning the planet,” says Thomas Wagner.

Travel influencer Nicolas Lafaille is proof of this. On his Instagram feed, followed by 184,000 people, no photos taken in distant countries or contests. “I avoid flying. If I have to do it, I will not put it in story, because I have a responsibility. We can no longer make people believe that traveling this way is cool, because it is not. »

Contacted by brands and agencies following its forum, Paye ton influence is still struggling to convince the biggest influencers. “We still managed to talk to an influencer with 450,000 subscribers who thought that all she had to do was offset her carbon footprint to continue traveling as before. He was told that he especially needed to reduce his number of flights. She replied that she would find out. “A beginning of awareness, perhaps.