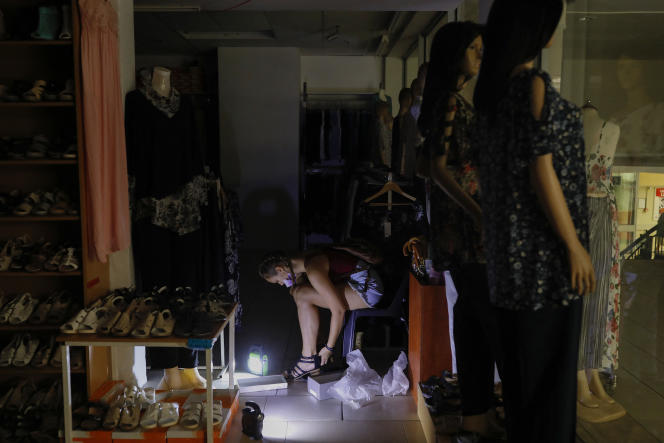 Annoyance gave way to uncertainty. After weeks of close power cuts, South African businesses large and small are suffering in terms of productivity but also costs, when they would rather hire to forget the post-pandemic blues.

At Native Rebels, a bar overlooking the huge township of Soweto, near Johannesburg, the generator, which takes over the power as soon as it disappears, largely cuts into profits, co-manager Masechaba Nonyane told AFP. , 33 years old “We thought that the Covid had sealed us well. Now we pay ourselves eight hours a day without juice,” jokes the trendy young woman: “Very detrimental, it affects our results. »

The country is familiar with these load shedding, but their frequency has intensified recently. Up to stage 6 (on a scale of 8) for two weeks in July, the worst level since the end of 2019. Since then, the cuts, fewer in number, have remained daily and darken the mood of this end of southern winter. After years of mismanagement and corruption, the national company Eskom is unable to produce enough energy to meet the country’s needs. Its coal-fired power plants (80% of electricity in South Africa) are aging and in need of repair.

Each “stage” of power outage costs the country the equivalent of 29 million euros per day, according to a government statement in March. The result is a disastrous spiral, Ismail Fasanya, lecturer in economics at the University of the Witwatersrand, told AFP: “Shedding will lead to further job losses, which will lead to lower production. This will affect spending. This will affect growth even more. »

Having to buy and operate generators represents an additional cost, discouraging some from starting their own business or foreigners from investing, the economist believes. The impact on job creation is particularly worrying, with an unemployment rate worsened to 34.5% by the destructive effects of the Covid-19 pandemic.

“It’s obvious, just walk through the streets of our townships, the paths of our villages, we see the ravages of the Covid on employment”, noted President Cyril Ramaphosa, Friday, July 15, in a speech televised. Mr. Ramaphosa also referred to the energy crisis, saying he would announce measures “in the coming days”, without further details.

In the meantime, he felt that creating competition in the energy sector, with multiple public operators, as exists in countries like China, would be “not a bad idea”. “We must use all available means and remove regulatory hurdles to bring more electricity to the grid as soon as possible,” he said.

Energy experts and even debt-ridden Eskom are calling on the government to invest quickly in renewables, especially solar, as the best way to close the energy gap. “This would support small businesses and reduce job losses,” Fasanya notes. If we get there fast enough to avoid putting the key on the door…

In Soweto, the bar owner tells AFP that her staff already close earlier when the evening is calm, just to limit the diesel consumption of the generator. “I am very worried about our survival. I fear for my employees, I don’t know how many of them I will be able to keep,” she said. And “if people don’t work and don’t have an income, then that creates a whole host of other problems” in a country plagued by high crime and which is already one of the most unequal in the world.

News Editor - July 18, 2022 0
Two cases of Marburg virus disease, a hemorrhagic fever almost as deadly as Ebola, have been recorded for the first time in Ghana, health...