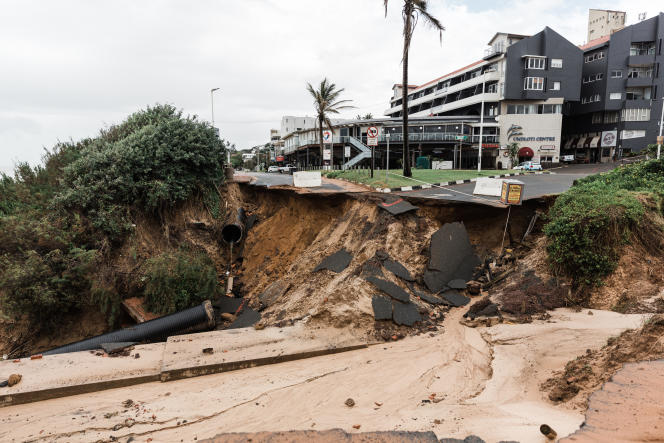 South Africa, hit by unprecedented deadly floods in April, was once again hit by severe weather on the east coast, forcing a few hundred people from their homes on Sunday May 22, authorities said.

No casualties have been reported so far but significant destruction has been observed, mainly in the metropolitan area of ​​Durban, capital of Kwazulu-Natal province. “As the information comes in, a disturbing picture is emerging,” the province’s chief minister, Sihle Zikalala, told a news conference.

Torrential rains had killed nearly 450 people in late April in floods and landslides. Survivors had remained ten days without access to drinking water. President Cyril Ramaphosa had declared a state of national disaster.

The worst natural disaster on record in the country had caused massive damage estimated at several hundred million euros, in a region which had already suffered costly destruction during an unprecedented wave of riots and looting in July.

Repairs were underway, but the new floods again affected infrastructure, roads cut, bridges and buildings damaged. “Some areas are inaccessible and have become islands,” Zikalala said.

Near Umdloti beach, in the north of the city, sections of roads collapsed, leaving a gaping hole and cars balanced, one wheel in the void, noted an AFP journalist on the spot. The sewage treatment plant was damaged, according to the eThekwini conurbation which encompasses Durban.

Visibly stricken, Kevin Govender, who lived in a nearby building, told AFP of the water and mud rising to the second floor: “The flooding started on Saturday afternoon. But the road caved in and we couldn’t get out” before help arrived on Sunday.

Nearly 250 people had been evacuated preventively during the night. These operations and rescues continued on Sunday, with the emergency services receiving an increasing number of calls. Some residents are without electricity. Some 80 reception centers have been opened. The police, firefighters and rescue teams are mobilized. The army was called in as reinforcements.

Informal settlements located in flood-prone areas close to watercourses and particularly affected during previous floods have been placed under surveillance. More than 200 mm of precipitation was recorded in 24 hours in certain areas, according to the national institute of meteorology which maintained the alert at the maximum level. The rains are expected to continue through Monday.

Greater Durban has a population of 3.9 million. Open to the Indian Ocean, its port is one of the main maritime terminals on the continent. South Africa is generally spared the storms that regularly hit its neighbors such as Mozambique or Madagascar.