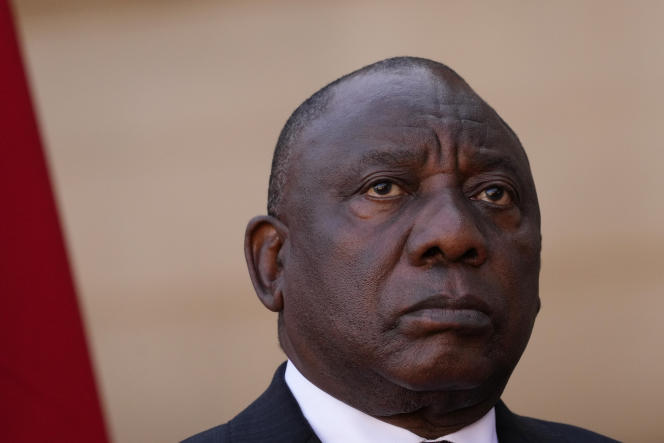 South African president allegedly abducted and interrogated burglars who stumbled upon £3.8m ‘hidden’ at one of his properties, before buying their silence, ‘kidnapping’ and ‘corruption’ complaint claims Wednesday June 1 against the Head of State by a former senior official.

“Today I have taken the unprecedented step of pressing charges against His Excellency the President of the Republic of South Africa,” Cyril Ramaphosa, former South African intelligence chief Arthur Fraser said in a statement. of which the AFP obtained a copy. “This complaint stems from the theft of (…) more than $4 million hidden” from a farm owned by Mr. Ramaphosa in the northeast of the country, adds Mr. Fraser.

Briefly, Mr. Fraser’s statement lacks detail. He nevertheless claims that the burglary was committed on February 9, 2020 and that “the president concealed this offense” from the police and the tax services “and then paid the culprits for their silence”.

Mr. Fraser accuses Mr. Ramaphosa of “obstructing justice”, and of having organized “the abduction of the suspects, their interrogation at his property and their corruption”. He says he provided the police with “supporting evidence” for his complaint: “Photos, bank accounts, names and videos. His lawyer, Me Eric Mabuza, confirmed to AFP that the complaint was lodged at a Johannesburg police station on Wednesday.

After a career in intelligence, Mr. Fraser had taken over as head of the corrections service. Two months after the imprisonment of former President Jacob Zuma in July 2021 for contempt of justice, he had taken the decision to release him on parole for medical reasons. Mr. Ramaphosa’s main political opponent within the ANC, the historic ruling party, Mr. Zuma was forced to resign in 2018 after a series of corruption scandals.

Mr. Ramaphosa has made the fight against this scourge a priority. But he himself was called to testify before the commission investigating the looting of state coffers during the Zuma era. The ANC must decide by December whether or not to retain Mr. Ramaphosa as the 2024 presidential candidate.