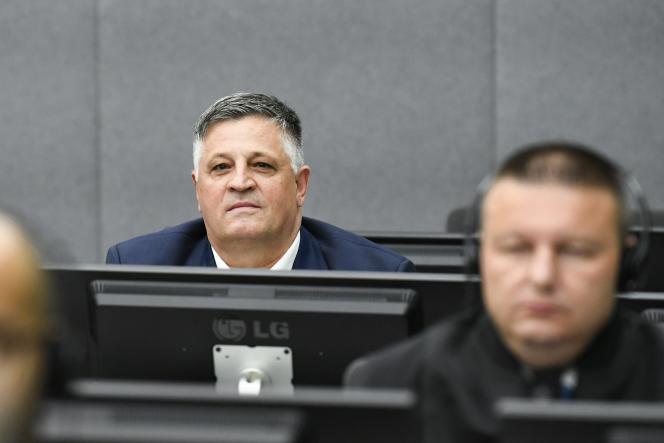 The Special Court for Kosovo (KSC) on Wednesday (May 18) sentenced two veterans to four and a half years in prison for witness intimidation, in a first verdict on Kosovo’s 1990s war of independence from Serbia. “This judgment clearly portrays these acts for what they are: criminal and unpatriotic,” Presiding Judge Charles Smith said in sentencing veterans Hysni Gucati and Nasim Haradinaj.

MM. Gucati and Haradinaj, respectively leader and deputy leader of an organization of veterans of the Albanian independence guerrilla, the Kosovo Liberation Army (UCK), were accused of being part of a group that seeks to obstruct justice. They were convicted of revealing classified information from the court, including identifying details of witnesses, during three press conferences between September 7 and September 25, 2020. They were arrested in the aftermath, heavily armed , during an operation at the headquarters of the veterans association in Pristina and transferred to The Hague for trial before the KSC.

According to the court’s prosecutor, the two men disparage anyone cooperating with the court, calling them “spies” and “collaborators” who “betrayed” their compatriots. Both pleaded not guilty when the trial opened in October. The veterans’ association said it received confidential court filings, sent anonymously, which included information about protected witnesses and pending indictments.

According to the verdict delivered by Judge Charles Smith, MM. Gucati and Haradinaj obstructed justice by means of “serious threats”, were guilty of intimidation during criminal proceedings and of violation of the secrecy of the proceedings.

Several former commanders of the Kosovo Liberation Army (UCK) are under investigation for war crimes committed during the conflict (1998-1999), which claimed 13,000 lives and opposed, in what was at the time a province in southern Serbia, guerrilla independence to Serbian forces. Former Kosovo president and former KLA political leader Hashim Thaçi – who resigned in 2020 after his indictment – ​​is accused of war crimes and crimes against humanity.

The Special Court for Kosovo (KSC) is a body under Kosovo law composed of international judges and charged with investigating crimes committed by the KLA during and after the conflict. Created in 2015, it sits in the Netherlands to protect witnesses who are under pressure and threats.

The first trial held by the KSC opened in September 2021, against Salih Mustafa, a former KLA leader, accused of torture and murder in a detention center during the war with Serbia. Many KLA veterans are fiercely hostile to the tribunal’s work, defending the legitimacy of their “war of liberation” against Serbian forces.

The creation of this tribunal was decided following the publication of a report by Swiss Senator Dick Marty in 2010, itself launched after the revelations of the former prosecutor of the International Criminal Tribunal for the former Yugoslavia ( ICTY) Carla del Ponte, who denounced acts of organ trafficking. But the indictment issued against Salih Mustafa does not mention it. As for the ICTY, it had prosecuted some Kosovar officials for war crimes. Among them, ex-prime minister Ramush Haradinaj, who was eventually acquitted. During her trial, Carla del Ponte denounced the intimidation of witnesses in Kosovo, where “the problem is widespread, systematic and potentially deadly”. And the Kosovo Tribunal will not have escaped pressure on witnesses.