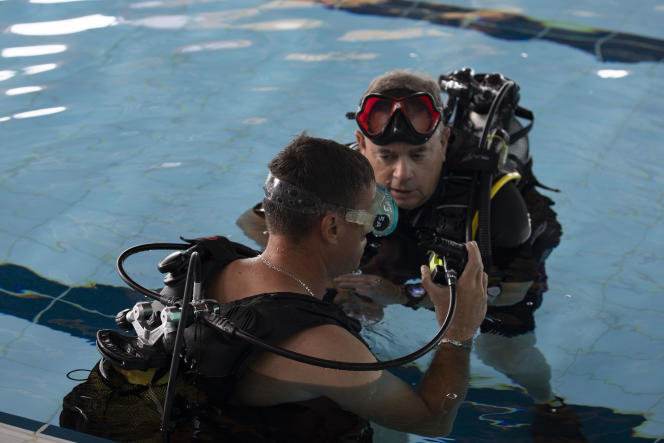 This Friday morning in June, the heat is already there, the atmosphere is joyful, laughter bursts here and there, around twenty soldiers and gendarmes take part in a biathlon event. Aged between 25 and 49, Stéphane, Eymeric, Morgan, Guillaume… all have in common that they have been physically or psychologically injured in the field, during missions in Afghanistan, Guyana or Mali, during Sentinel operations or even on the home-to-work journey. All suffer from post-traumatic stress disorder (PTSD). They met for a week at the regional youth and sports center (CRJS) in Aubigny-sur-Nère (Cher), a vast green setting bordered by ponds, during the 11th edition of the Military Injuries and Sports Meetings, organized by the army casualty aid unit (Cabat) since 2012, in coordination with the National Center for Defense Sports (CNSD), the Sports Circle of the National Institution for Invalids (Csini) and other support cells for the wounded of other armies. These meetings take place over four weeks, which makes it possible to accommodate around eighty injured people each year.

For this shooting and orienteering event, they work in teams, in pairs or in trios, and must go and find beacons around the lake during a race that they run, walk or cycle. Each test is adapted. During the shooting test, if they do not want to touch a weapon, they can use the blowgun. Here, there is no competition. “Smile and sweat, it’s won”, says the lieutenant, national referent in the accompaniment of the wounded of the National Gendarmerie, who like his colleagues, for security reasons, asked to be quoted only by his first name. , Frank.

It’s one of the many activities offered during the week: diving in the pool, horse riding, archery, go-karts, wheelchair rugby, mountain biking. Present throughout the stay, the staff, from doctors to sports guides, including logistics players, also participate in the sessions.

“These meetings are an essential step in the life course of the injured soldier. They aim, through sport, to reconnect by creating a friendly and benevolent atmosphere to guide him towards resocialization, “explains Isabelle, Lieutenant-Colonel, Deputy Head of the Army Wounded Aid Cell. , who coordinates the meetings that week. “Sport makes it possible to convey the values ​​of autonomy, of regaining self-confidence, of regaining a feeling of calm. Here, the questions of hierarchy, uniforms or ranks, significant in the military world, no longer exist to keep only the brotherhood of arms, “continues Isabelle.

To participate in these courses, they first had to overcome serious apprehensions, in particular that of public transport, a frequent symptom of PTSD. Numerous, the signs can be divided into three categories. They are repeated relivings of the traumatic event, with flashbacks and nightmares. Associated with this are symptoms of avoidance of situations reminiscent of the trauma, with hypervigilance, loss of interest in previously enjoyed activities, withdrawal into oneself, a kind of psychic “anesthesia” which can go as far as depression. There is also a neurovegetative hypertonia with a permanent state of tension, insomnia, anxiety… So many symptoms which have strong consequences, social and on family life. PTSD is often associated with other neuropsychological disorders, in particular addictions, as the risk of suicidal behavior may be increased.

It is often their referent who convinced them to come and breathe fresh air. He accompanies them when they go on sick leave to help them in their reconstruction. “During these internships, they realize that their symptoms are common and discover that they are not alone. Bringing them out of their isolation is often a trigger and serves as a springboard for them to take charge of their recovery, ”describes Valérie, a referent in a support cell for the injured.

Thus, Guillaume was apprehensive about coming because of “the crowd and the noise”. The beginning of the unrest dates back to 2019, almost ten years after two problematic missions, which “turned everything upside down”. For Morgan too, the psychic suffering arrived a decade after the missions. “The years that followed were fine, although I had some apprehensions, mood swings. I was doing sports thoroughly, then I had a phase where I was no longer doing sports and it was going less and less well, “he says. “In fact, we knew deep down that something was wrong, but the hardest thing is to admit it,” adds Guillaume.

The contrast with the start of the week is striking. No one smiled, the trainees spoke little to each other. At first, Stéphane, who hesitated until it was time to board the train, did not speak. But this Friday, he confides “to have the impression of having grown up”. “The advantage of doing a sporting activity is that you don’t think of anything else, and, with many, there is emulation, play, there is no judgment,” he continues.

“Sport participates in the reconstruction, we are here to give them a taste for practice, self-transcendence and a spirit of camaraderie,” says Lieutenant Referent Franck, The goal is for them to continue a sporting practice that suits them in a suitable club. Some even aim to register for the Invictus Games, an international multi-sport competition for wounded soldiers and war veterans or people with disabilities. Like Mika (the first name has been changed), from Toulouse, who passed the wheelchair rugby tests. However, he wanted to leave on Tuesday. The management reassured him and convinced him to stay. What he does not regret.

“With this internship, I came into contact with people I didn’t know, it’s a revelation, I didn’t think I could do it anymore… says Stéphane, whose voice is choking. I no longer found my place within the company, this internship allows us to say that we are still capable of it. “It’s good for morale, it helps break the routine,” said Eymeric, an arm amputated. Many also report great difficulty in speaking with those close to them.

“You also have to turn the page, often mourn a career, the regiment, which is not easy,” adds Isabelle, who oversees this program funded by donations from 23 patrons.

“We see everyone opening up and evolving as the week goes on,” says Lydia, a psychologist with the army health service. She offers the interns talks around the lake, “the best desk [she’s] ever found, outside the formal framework of the session.” “We are here to ease the tensions of everyday life, to make them dare, feel, live, when they tend to close themselves in, activity and play are a lever,” she continues.

“The look has changed a lot on the psychological injury, especially since the Gulf War in 1991, it is now recognized and taken into account by the armies, which accompany the wounded with the health service of the armies [SSA]”, notes psychiatrist Yann Andruétan, national coordinator of medico-psychological support for the armies at the central management of the SSA.

For management, psychotherapy, which consists of working on the story, is the first treatment. It may include eye movement desensitization and reprocessing (EMDR), which uses sensory stimulation, including visual input. Added to this is drug treatment. “Specific serotonin reuptake inhibitors – a class of psychotropic drugs acting as antidepressants – currently represent the first-line class in pharmacology,” Public Health France said in 2019. This family includes Prozac and its “descendants.” “The literature has shown the positive effects of antidepressants, which help in particular to treat sleep problems, neurotoxic for the brain”, explains this psychiatrist of the armies. According to him, the therapy aims, among other things, to “transform the trauma into a bad memory”.

From 4% to 10% of soldiers suffer from psychological injuries, according to various studies, but these figures would be underestimated. Many are starting a career change. Thus Stéphane, who will start training as a blacksmith and cutler, supported by his wife and children. A new life with more serenity.