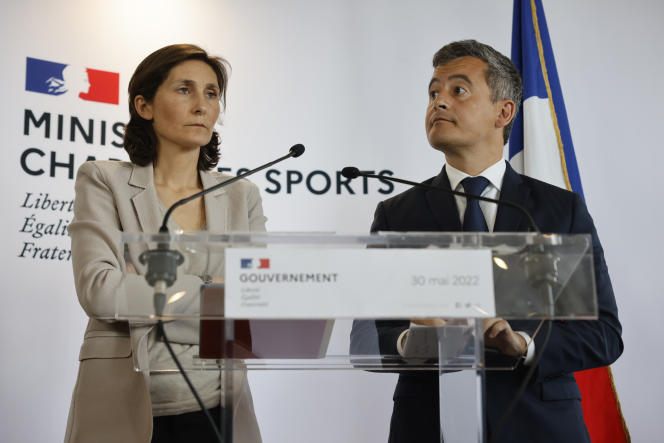 The communication on the figures after the fiasco of the Stade de France turns into a cacophony. At the end of a crisis meeting at the Ministry of Sports, the Minister of the Interior, Gérald Darmanin, explained, on Monday May 30, the dysfunctions and other excesses during the Champions League final, Saturday May 28, by the presence of “30,000 to 40,000 Liverpool supporters either without tickets or with forged tickets” at the entrance gates of the Dionysian enclosure.

To substantiate his accusations and show the extent of this “massive, industrial and organized fraud of counterfeit banknotes” coming “from across the Channel”, Mr. Darmanin relied on “figures confirmed by UEFA “. He also indicated that 70% of the tickets presented to stewards at pre-screening were fake and counted 2,600 “unvalidated” tickets at the entrance to the stadium, “even though [their holders] had passed the first screening” .

On Tuesday, May 31, RMC Sport claimed that the French Football Federation (FFF) and the Union of European Football Associations (UEFA) had assessed the number of “counterfeit tickets scanned” at the gates of the stadium at 2,800. This new figure would have been given by the two organizing bodies of the meeting between Liverpool and Real Madrid during the crisis meeting on Monday.

Except that UEFA and the FFF say the opposite on Tuesday evening. “We have not communicated any figures”, we say in the corridors of the European body. The malaise is palpable in Nyon (Switzerland), at the headquarters of UEFA, where the feeling of having served as a guarantee for the hasty communication of the French authorities prevails.

Launch of an independent investigation

Above all, the figure put forward by Mr. Darmanin of 30,000 to 40,000 English supporters without tickets or with counterfeit tickets creates trouble internally. Several UEFA executives question this figure, considering it too “high”, even “absurd”, and refuse to jump to conclusions in order to “try to hedge”.

“We have already experienced this type of overflow, especially during the Champions League final in Athens in 2007, when Liverpool fans without tickets entered the stadium and jumped the gates. But we had only identified several hundred cases, estimates a former UEFA executive. The figure put forward today does not hold water. »

Before giving this figure publicly, Gérald Darmanin had relied on the estimates made by the stakeholders gathered around the table on Monday, at the Ministry of Sports: the RATP would have noted an increase in traffic to its network of 40% in the direction of from the Stade de France; “79,000 people took urban transport,” says the Minister of the Interior – the RATP has only identified 69,000 (RER B, RER D, line 13 of the metro) -; 16,000 people are said to have taken coaches and “thousands of vehicles” to have traveled to the Dionysian enclosure, with a capacity of 80,000 seats

This estimate of 30,000 to 40,000 British supporters “either without tickets or with counterfeit tickets” is intended to be refined, “at the margin” in the coming days, over the investigations carried out by each stakeholder, underlines- t-on Tuesday, at the Ministry of Sports.

In Nyon, where several UEFA employees were scandalized by the attitude and lack of organization of the police in Saint-Denis, we refuse to give precise figures of supporters without tickets or with tickets tampered with “too quickly”. UEFA officials expect the publication, in several months, of the conclusions of the “independent” investigation carried out, on behalf of the European body, by the Portuguese parliamentarian Tiago Brandao Rodrigues. This “transparent” investigation is supposed to “sort right from wrong”.

“We are not trying to blame anyone without having tangible evidence,” UEFA said.

Caught between the French authorities and the highest body of European football, the FFF officially communicated on Tuesday evening, confirming the government’s thesis. In charge, on Saturday, of the employment of private security agents in charge of filtering and pre-filtering, as well as the routing of the coaches of the supporters of the two teams, the federation “found that 110,000 people had gone” to the stadium then that “75,000 tickets [had] been issued”.

“These 35,000 additional people, in possession of counterfeit tickets or without a ticket, have caused public order disturbances”, estimated the FFF, counting “79,200 people who took public transport”, “21,000 came by bus “, “6,000 by taxi and private driver” and “4,100 with their private vehicles”.

However, where did these 35,000 additional people go after the prefect of police, Didier Lallement, decided to lift the pre-filtering at the exit of the RER D on the English side to avoid a tragedy, if 2,800 counterfeit notes “only” were scanned? at the entrance to the Stade de France? The battle of numbers has only just begun.