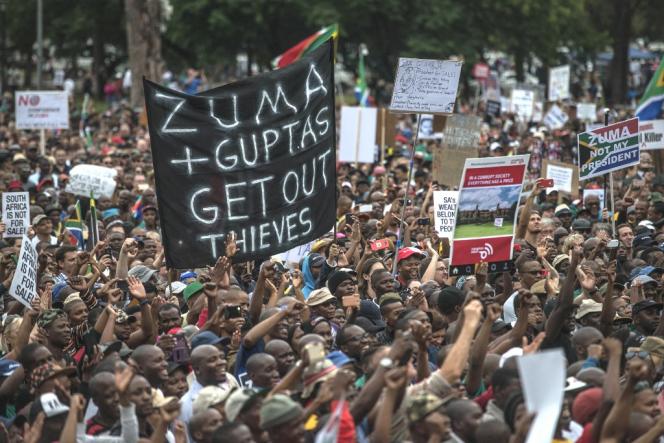 South Africa has been trying to bring them to justice for years: two brothers from the sulphurous Gupta family, at the heart of a vast state corruption scandal involving ex-president Jacob Zuma, have been arrested in the Emirates .

South Africa’s Department of Justice said in a statement Monday evening that it had received confirmation: “The Department of Justice and Corrections confirms that it has received information from authorities in the United Arab Emirates (UAE) according to which the fugitives Rajesh and Atul Gupta were arrested. Dubai police confirmed their arrest and probable extradition on Tuesday, June 7.

The two countries are in discussion on the procedure that will follow, he continued, adding that “the South African government will continue to cooperate with the UAE”. An extradition agreement was finalized between the two countries in 2021. Ajay, Atul and Rajesh Gupta, three brothers of Indian origin and a formidable trio of businessmen, are accused of looting state coffers South African, with the complicity of Mr. Zuma, during his nine years in power (2009-2018).

Interpol launched a wanted notice in July against two of them, in the context of a dubious contract of 25 million rand (1.5 million euros) involving a company linked to the family. The trial had been postponed to July “in the absence of the defendants”, explained the National Prosecutor’s Office (NPA). A new hearing was then set for September 6 at the Bloemfontein court (center). The third brother, Ajay, is not concerned by this chapter, but is cited in another case of embezzlement and corruption.

In 2016, after revelations in the press, a damning report on widespread corruption details how the siblings close to Mr. Zuma won lucrative public contracts and participated in the management of state affairs, going so far as to appoint ministers. They are accused of having siphoned off the coffers of public companies in several sectors: electricity with Eskom, transport with Transnet and aviation with SAA.

The trio fled South Africa shortly after the creation in 2018 of a commission chaired by Judge Raymond Zondo to investigate state corruption. A part of his report submitted in April, the conclusions of which are still awaited, underlines that “it is clear that from the beginning of his first mandate, President Zuma was ready to do whatever the Guptas wanted him to do to them “.

These scandals contributed to the fall of the head of state, dropped by his party and forced to resign. Sentenced in July to fifteen months in prison for contempt of justice, he is now on parole for health reasons. His corruption trial, in a separate case, is still ongoing.

Jacob Zuma’s successor, current President Cyril Ramaphosa, has made the fight against corruption his priority. But he himself was heard by the Zondo commission.

Arrived in South Africa in 1993, the Guptas built a business empire, investing in the mining, IT and media sectors. In 2019, the US Treasury imposed sanctions on them and froze their assets under its jurisdiction. According to some estimates, the trio have stolen around 50 billion rand ($3 billion) through their illicit activities.

News Editor - June 7, 2022 0
LETTER FROM MALMÖSince May 23, strange drawings, reminiscent of propaganda images from the 1940s, have adorned bus stops in Sweden. The same were published...